I Fell in Love Up a Rutted Road

Lisa Says: I'd like to welcome to the Inkwell today a dear friend and wonderful writer, Sharon Kirk Clifton.  In Up the Rutted Road she brings 1950s Appalachia to life through the eyes of a young girl, complete with revival services, grape Nehi, and coon dogs. The story is poignant and beautiful in their presentation of a way of life that finds joy in simple things. Although targeted to middle graders, I frankly enjoyed it and I think our readers would too. And now, without further ado; here's Sharon.

Sharon:
In late 1990, three years into my career as a professional storyteller, I applied for, and received, a grant to travel through southern Appalachia, researching the oral tradition and culture of the area for my Jack’s Mama program. With my younger daughter, Dawna, at my side, we set out in June 1991 to travel up many a rutted road, interviewing scores of folks, from college professors and regional storytellers to coal miners, cultural center staffers, folks hanging out at senior centers, and anyone else with a story to tell.
Below are snippets from some of their stories, accounts I treasure because they enriched not only my Jack’s Mama storytelling persona, but also the characters readers encounter in my first middle-grade novel, Up a Rutted Road, set in eastern Kentucky in 1950.

“How old do ye reckon me to be?”
Only a little younger than God, I wanted to say, but courtesy required me to understate my guess. I scratched my chin with my thumbnail and studied his leathern face. Life had etched wrinkles around his eyes and mouth, creases so deep one could drive a jolt wagon through them.
“Seventy something?” I said, shooting him a half grin. I glanced sideways at his wife, sitting in a rocker nearly identical to his. She looked over her spectacles at me, grinned, and went back to her mending.
He straightened his spine and leaned back. “Ninety-two!” His face said this was a game he liked to play. “And, come spring, if’n the Good Lord lets me linger, I’m leadin’ another mule train over these here mountains. Northerners, flatlanders, pay good money to let an ol’ mule skinner like me take ’em acrost.”
When he admitted this might well be his last trail ride, sadness darkened his chicory-blue eyes for a fleeting second. He quickly moved on to another subject.
“’D’I ever tell y’uns about how we used to shoe turkeys?” Now he wore that special grin we taletellers don when we’re about to launch into a story, albeit, a true one in this case.

I watched as the elderly Melungeon woman lifted aside the chintz drape that served as a door to the inward parts of her humble cottage. With halting steps, she soon returned to the cluttered front room, cradling in her arms a mountain dulcimer. It could have been a newborn baby for all her care. In her right hand, she held a turkey feather and something else I couldn’t see well. Whatever it was, she laid it on the little table beside her chair. Then she smoothed the fabric of her worn cotton apron and gently placed the instrument on her knees.
“This here’s my dulcimore.” She drew the feather over the strings, pausing to tighten the wooden peg of one that had gone flat. As the fingers of her left hand pressed the wire strings in front of the frets, she got a rhythm going across the worn strum hollow. For a moment or two, she just played. Then her voice joined the sweet melody.
“In Scarlet Town whar I was born, thar was a fair maid dwellin’. Made ever’ youth cry, ‘Well-a-day,’ for love of Barbr’y Allen.” A quiet peace washed over me, as I listened to her sing the soulful “song ballet.” She graced me with a couple more Appalachian folk songs before setting aside the dulcimer and handing me the object she had carried in along with the feather.
“A record?” I said. “You’ve made a record of your beautiful playing?”
She chuckled at that. “Well, not me, exactly. Some folks come down from a museum and recorded my playin’ and sangin’. I cain’t for the life o’ me figger out why.”
“Who were they? What museum were they with?”
“Uhm…” She thought for a moment. “The Smithsonian. You heard of it?”
My grin was so broad, I thought my face would crack. “Yes’m. Indeed I have heard of the Smithsonian.”
She handed me the 45 rpm record. “I want you to have this. They gave me several so’s I could hand some out.”
* * *

“Stand still.” I spoke softly, so as not to agitate the dog. “Smile for the sake of the old man. He’s watching every move we make from behind that curtain. Don’t show teeth.” The dog soon quieted, stretched, yawned, and sauntered toward us. As we gave him a good scratching, the door to the ancient single-wide opened slowly. A tall man who looked to be in his 80s filled the entrance. No gun in sight. Good. The dog had accepted us, so maybe the master would, too. He hadn’t shot at us, at any rate. His granddaughter had warned that he might, being wary of strangers.
I introduced myself and Dawna, and soon we were inside the dim, stuffy trailer sipping sweet tea, while I told him of our mission.
“Is it all right with you if I record our talk?” I said.
He wiped his hand across his mouth and chin. His whisker stubbles made a scratching sound. “I reckon so.”
As I reached into my bag to get my little Sony cassette recorder, he unfolded himself from his chair and went to the kitchen. He opened an upper cabinet door and lifted a large hand gun from its shelf. Dawna and I looked at one another. Is this our cue to exit? I wondered. But we stayed seated and smiled.
He held the weapon out as one might display a pie for approval. “This here’s my gun.” As if we needed to have the object identified. What was I expected to say?
“It certainly is a nice one. I can tell you take good care of it.”
“Yup. Gotta keep ‘em oiled and in good working order.”
“Are you a good shot?”
“Yup.” I didn’t doubt it.
He set the gun on the coffee table that separated us. For the next hour or so, he told us about his childhood and life in the mountains. Though he didn’t mention the gun again, I never forgot it was there. Perhaps that was the point.

As we journeyed through eastern Kentucky, Tennessee, and northern Georgia that June, we fell in love with a people. Early on, I met with Dr. Loyal Jones, founding director of Berea College’s Appalachian Center, who adjured me not to portray the people as ignorant clodhoppers, à la The Beverly Hillbillies and Li’l Abner.
“We have a rich cultural heritage,” he said. “Honor that. And listen to the language. Listen closely. Get the idioms right. Realize you’re not hearing uneducated rustics who don’t know ‘proper’ English. You’re hearing echoes of Elizabethan English—no, even earlier than that. Chaucerian English. Especially in the speech of the older generation.”
Dr. Jones and I also discussed the oral tradition of the predominantly Scottish, Irish, Scots-Irish, and German people who settled the region. One can learn much about a people from their folktales and lore. Both reveal core values. For example, the stories that comprise the Jack cycle of tales reinforce highlanders’ esteem of:

·      Home and family, for, though Jack is always going off to seek his fortune, he invariably returns to hearth and home.
·      Helping others less fortunate or in need of rescuing, whether it be an old, hungry hunchity woman or a beautiful princess in peril, for Jack is no respecter of persons.
·      Setting things akilter to rights, for when Jack leaves home, he enters a troubled world and takes it upon himself to fix the parts he can.
·      Sowing good seed, believing “what goes around, comes around” and “what you sow, you’re going to reap.”
·      Independence, for Jack leaves home to make his own way in the world; however, though he first tries to solve his own problems, in the end he’s not too prideful to accept some help himself.
·      Eschewing charity, for one can accept help or needed provisions only if one gives in return something of equitable worth. 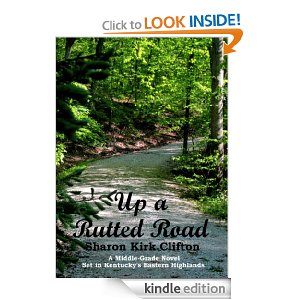 Readers of Up a Rutted Road will see all of these values expressed in the lives of the McCain and Holcomb families and one mysterious hermit who keeps showing up in the most unexpected places.

Lisa Again: Thanks for coming to the Inkwell, Sharon! I always love it when we have a chance to visit. When I was little my great grandma lived in a "holler" in Kentucky. This post took me back there and I could hear her voice again.

Up the Rutted Road is available on Amazon here.
And if you'd like to learn more about Sharon, you can check out her blog here.