Inborn empathy, I believe, is a gift from God. Some people have it, and some people don’t.

But can you learn empathy if you don’t already have it? I think it’s safe to say most of us have imaginations. And if, as a writer, you can touch the surface of your imagination, then you can keep going deeper until you feel whatever it is you want your characters (and consequently your readers) to feel.

Have you ever wondered how an actor cries on demand?
Some actors have drops squeezed into their eyes as soon as the camera pans away, so that on their next close-up they can squeeze the tears out. I’ve heard some pinch the inside of their leg.

But other actors cry real tears that touch deep and very raw emotions. I heard one actress say that whenever she had to cry, she thought about her father and imagined what her life would be like if he died. Her imagination led her to empathy. Those are the scenes that reach out and grab the viewers by their heart-strings.

Writing, like acting, must touch something deep in the reader, whether it’s joy or sorrow, in order to give them a satisfying experience.

In my upcoming novel, True North, Joe and Lisa Kendall are grieving the loss of their son. Each is grieving in their own way; each in their own time. As a writer, it is my job to put the reader into either Joe or Lisa’s shoes – maybe both. But I’ve never lost a child that I’ve held in my arms. I did have the broken heart of a miscarriage followed shortly by a hysterectomy at a very young age, losing the dream of future children. I know what those feelings are like. But I don’t know the feeling of losing a child I’ve held close to my heart, and built memories with.

How then could I represent this in an honest and true way in my writing? It had to be more than thinking, “Oh, I’ll bet they feel this way and they’ll react in this other way.” No. I had to dig deep inside myself, hit a few nerves, then dig deeper still. I had to imagine the early years with my own child, and then imagine the unthinkable.
It wasn’t easy. It was beyond painful. Then, because my hero’s viewpoint is important to the story, I had to do it all over again through the eyes and heart of a father. I still get a little teary-eyed when I think about all I’d imagined. But if I didn’t bring a tear to my own eyes, how could I possibly bring one to the reader’s eyes?

This could, I think, also be referred to as deep point of view. I really never thought of it that way until recently. After the final edits and galley proofs were done on True North, I had a moment of panic when I realized my characters had a lot of internal thought. Maybe it was too much. Would that read as boring? I didn’t know what to do. But when I asked my editor about it, she said she and the publisher had a discussion about it when they first bought the book. They felt it was deep point of view and was necessary to the story because of the grieving process that became part of the conflict.

I had to think about this for a while. And I still wonder. Did my imagination lead me to empathy? Did I reach this deep point of view that will elicit a tear from my readers? I hope so. It made me cry, and – not that I want the reader to feel real pain – I hope it brings a tear or two to their eyes so they come away with a complete and satisfying experience from the book.

If you’re a writer and your manuscript doesn’t feel right, could it be that it isn’t touching your emotions? If so, it doesn’t mean you’re a bad writer. Try deepening your imagination, dig a little deeper, and see if that changes your story up.

Do you think empathy and imagination are tied together?
What gives you a satisfying experience as a reader?
If you’re a writer, how far do you go to elicit emotion in your characters? 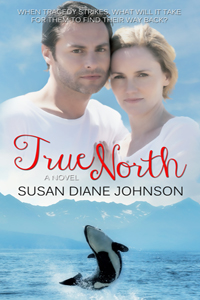 True North is Suzie Johnson’s second novel. Her first novel, No Substitute, a contemporary inspirational novel, is out now from White Rose Press of The Pelican Book Group. She is a regular contributor to the Inkwell Inspirations blog, a member of ACFW, RWA, and is the cancer registrar at her local hospital. Suzie and her husband live in the Pacific Northwest with their naughty little cat on an island that is definitely not tropical. Together, they are the parents of a wonderful grown son who makes them proud every day – even though he lives way too far away. You can visit Suzie at the following places:
http://www.susandianejohnson.com
http://inkwellinspirations.com
http://www.facebook.com/suziejohnsonauthor
http://www.pinterest.com/suziejohnson1
Posted by Suzie Johnson at July 24, 2013