Do you look at the stamps on the letters and parcels you receive in the mail? I am not a stamp collector, but I find myself drawn to the beautiful artwork involved in postage stamps with their different themes that cover every type of life on earth as well as most historical events.


At an early age, I learned to collect used stamps and bring them to the church where they were added to a large jar. I didn't know what they would be used for, and I never asked. It was just something you did much like adding your dime in the offering plate.

On one of my downtown forays to Winnipeg's Hudson Bay Company store I happened to end up on the 5th floor in the coin and stamp corner and a small white gunny-sack looking bag caught my eye. I eased open the strings that held it closed and found it chock-full of used postage stamps - stamps that looked like the ones I'd been cutting off envelopes and giving to the church.

I brought the bag to the man behind the counter and told him they looked like the kind I'd been bringing to church. He explained that it was one way local churches raised money for missions - by selling the collected stamps to the dealers. And then he went one step further and explained the correct way to cut off a stamp so a stamp collector would appreciate it more. In the following image, these 3 stamps could be worth more to a collector because they include the cancellation stamps - the rubber stamped image that covers both the stamp and the envelope.


The cancellation stamp details the origin and date and therefore contains historical information to enhance the stamp itself.

But lately, I've noticed a change in both the Canadian and American postal systems. Take a look at the following air mail envelope which I feel is a keeper for its beauty alone. Other than the return address which I've blocked out, do you see anything strange?

If you look close, you'll see that the top stamp - the one with the coffee pot - was cancelled in Spokane. But the others weren't cancelled at all. What does this mean? Well to me, it means a free stamp that I can re-use. Not that I'd do it, though because that would ruin this historical artifact.

The following image shows only the corner of 2 envelopes among several that I've received from the same person - and none of them have ever had cancellation stamps. How does that happen?

The bubble envelope below wasn't from the same person that sent the above envelopes, and yet none of these postage stamps are cancelled either.


Then I received this next envelope. None of the stamps are cancelled, but 3 of them have a black mark streaking across one corner. I suppose this is to stop anyone re-using the stamp, but those marks ruin it for an experienced stamp collector.

And then horrors, I started receiving envelopes with stamps that had been scribbled on, as if a toddler had gotten a hold of them and tried to draw a picture. Before I decided to write this post, I threw out several envelopes that contained many gorgeous stamps with pen scribbles on them.  The image below is only a small portion of the stamps I've noticed with this characteristic, and some of these have even been properly cancelled.

To me, marking and scribbling on postage stamps is akin to vandalism. When I first spotted this trend, I thought it originated from Canada Post's privatization of postal outlets where the private postal workers were cutting costs by not buying the rubber cancellation stamps. But is the same thing happening in the United States?

And it's not just North America. The following four groupings were taken from envelopes from Finland. The top left and bottom right were properly cancelled. The bottom left is acceptable. In the top right grouping, however, only the right side is cancelled. At least the left side isn't scribbled out.


A final observation... many people don't put stamps on parcels, but pay the postal clerks who add a stamp printed off on a postal machine like this one: 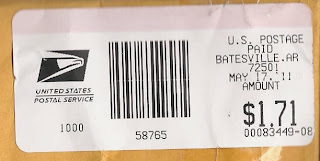 It's boring, but it works. Recently, however, a bubble envelope with this stamp arrived in my mail box: 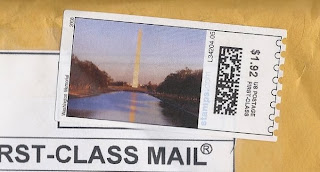 What are your thoughts? Do you notice the stamps on your mail? Do you know what's happening in the industry? We'd love to hear your thoughts on this. 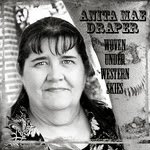 Anita Mae Draper is retired from the Canadian Armed Forces and lives on the prairie of southeast Saskatchewan, Canada with her hubby of 30 plus years and the youngest of their 4 kids. She writes cowboy stories set in the Old West, and Edwardian stories set in the East.  Anita Mae  semi-finaled in the ACFW's 2011 Genesis contest, and finaled in the Daphne du Maurier, Fool for Love, Duel on the Delta and the Linda Howard Award of Excellence contests.  Anita Mae has a short story, "Riding on a Christmas Wish" published in A Christmas Cup of Cheer, Guideposts Books, October 2013.  Anita Mae is represented by Mary Keeley of Books & Such Literary Agency. You can find Anita at   http://www.anitamaedraper.com/