On Sunday I heard “The Monster Mash” which brought back a shard of memory from an awkward middle school dance, but that’s a story for another day. The other thought prompted by the song was of the way book genres have been mashed together in recent years to make new, wonderful, weird combinations.

When I was little it seemed that “historical” meant sweeping family saga. Mysteries came in two varieties: hardboiled and cozy. Fantasy meant a stylized medieval setting with wizards, trolls, elves. But these days Historical Romantic Suspense is a thing. The line between Fantasy and Science Fiction has blurred to bring us steampunk (with or without supernatural beings.)

It’s possible that the trend could be taken too far.

I don’t think every element of a story needs to be chased down and tagged. That could get as a annoying as a facebook message replete with hashtags, #annoying #overuse #unnecessary. It’s kind of like poetic description, a little is tremendous—too much takes us into purple prose territory. I think the key for the author to remember is that when you are doing a mashup it is important to honor the elements of each of the genres upon which they are drawing. Not that every element can be equal, like in ballroom dancing, one of them is going to have to lead, but don't just let the other peter out. Be adventurous, but don't violate your readers trust! 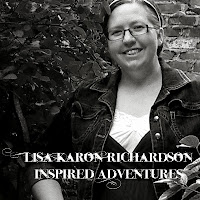 Influenced by books like The Secret Garden and The Little Princess, LISA KARON RICHARDSON’S early stories were heavy on boarding schools and creepy houses. Now, even though she’s (mostly) grown-up she still loves a healthy dash of adventure in any story she creates, even her real-life story. She’s been a missionary to the Seychelles and Gabon and now that she and her husband are back in America, they are tackling a new adventure, starting a daughter-work church in a new city. Vanishing Act, the second in the Charm and Deceit, series co-authored with Jennifer AlLee, released in September 2013. As did her novella entitled “Midnight Clear,” part of the Mistletoe Memories collection.
Posted by Lisa Karon Richardson at October 23, 2013