I got my first flu shot this year. We are expecting a new grandbaby in January, one of my kids is in public school, one is in college, and my husband and son-in-law are out every day working with the public every day. It just seemed like the right thing to do this year, so we all went in for a poke in the arm. (If you have a conviction about immunizations, that's fine. You are free to get a shot or not get a shot. I suggest you pray about it and follow the Lord's leading.) 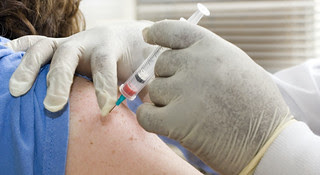 So I posted something on Facebook about my flu shot, and it generated some "conversations." You know those days when it's just better to avoid social media? It was one of those days. It seems like there are days, even weeks, when everyone has a gripe or a complaint or an anti-something opinion to post. The negativity agitates my spirit the way I used to get annoyed when my kids bickered and argued in the back of the minivan. Why? Because it's STRIFE, and strife is not a good thing to keep around.

From a natural standpoint, constant discord and contention is harmful to our health because it puts us in a state of negative stress, which weakens immunity, damages organs, and wears out our body parts sooner than God intended.

From a spiritual perspective, strife gets us out of sync with God. You can't be in strife and "love your neighbor as yourself" at the same time. It also generates a laundry list of other un-Christlike behaviors: grumbling, whining, complaining, backbiting, quarreling, gossiping, and so on.

It's possible to be in strife with ANYTHING, even an inanimate object. A malfunctioning car, the muddy footprints tracked through the house, yourself (yes, you can be in constant discord with yourself), God, your family members, the government, your bank account, even something as inconsequential as a fly. Or a Facebook post.

In Judges 6, we read about the nation of Israel being attacked, repeatedly, by the Midianites.

Because the power of Midian was so oppressive, the Israelites prepared shelters for themselves in mountain clefts, caves and strongholds. Whenever the Israelites planted their crops, the Midianites, Amalekites and other eastern peoples invaded the country. They camped on the land and ruined the crops all the way to Gaza and did not spare a living thing for Israel, neither sheep nor cattle nor donkeys. They came up with their livestock and their tents like swarms of locusts. It was impossible to count the men and their camels; they invaded the land to ravage it. Midian so impoverished the Israelites that they cried out to the Lord for help.

Now, you might be thinking, "What does that have to do with us today? We don't live near tribes of marauding raiders..." Well, thankfully, no, but Midian isn't just a random name of some random tribe. Midian, in Hebrew, is from the root word "madown," meaning brawling, contention, discord, or strife.

So you could say that the Israelites were hindered from prospering, to the point of poverty, by repeated attacks of strife.

Strife is as prevalent today as it was back in those days of marauding invaders. It just shows up and camps out in different forms... and devours our peace, and our joy, and our blessings. So what can we do?
Sometimes, staying out of strife is as simple as keeping our mouths shut (or our fingers off the keyboard). Sometimes, the only way out of strife is to avoid a situation, a place, or a relationship, and that gets more complicated. There is, unfortunately, no shot in the arm that will make us immune, but there are plenty of Bible verses that can help us avoid the life-thief that is strife in our day-to-day lives. Here's our family favorite... it gets quoted frequently around here.

Don't have anything to do with foolish and stupid arguments, because you know they produce quarrels. And the Lord's servant must not quarrel; instead, he must be kind to everyone, able to teach, not resentful.

I'm hoping for a flu-free season this year, and a strife-free one, for all of us!

Niki Turner is a writer, former pastor's wife, mother of four, and grandmother of two and a half. She has thus far been unsuccessful at coming up with catchy taglines for her writing, her purpose in life, or what she hopes to achieve in the future. Suggestions are welcome.
Posted by Niki Turner at October 24, 2013