Mistletoe Memories is a Christmas-themed book of connecting novellas set at Schooley’s Mountain, New Jersey. In yesterday’s Treasure Hunt post, Lisa Karon Richardson, author of Midnight Clear said,  “The four stories in MISTLETOE MEMORIES cover the almost 200 years after the house was built and center around a house that became a refuge that became an orphanage that became a home.” 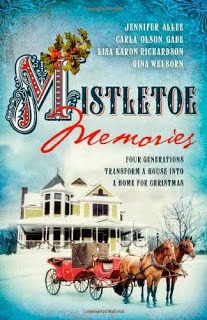 Join us as we travel back in time to when the house was first envisioned, and then walk by our side as we step through the stories to discover interesting facets of 4 couples who dared to dream of the house as their future home.

Carla Olson Gade has used an historic figure and estate to give credence to hero Stephan Yost's reason for being on Schooley's Mountain - an actual resort area back in the day. Carla has also placed heroine Annaliese Braun in one of those resorts as the doctor’s daughter.

Annaliese loves her summers on Schooley’s Mountain and would even accept life as a spinster if it allowed her to live there year ‘round. But late fall every year her father drags her back to their ornate Manhattan apartment. This year will be different though, for her father announces that he’s hired Stephan Yost to build her the house of her dreams in time for Christmas. Annaliese wonders if perhaps a home and family at Schooley's Mountain are in God’s plan for her after all.

But remorseful Stephan curbs his attraction for her lest she guess his secret and reject him outright, believing it would be less painful for everyone if he guards his heart and leaves quietly when the job is done.

Of course, I haven’t given you all the facts in this tender love story, and neither did Carla at first. I like the way she wrote the story, dropping bits of character information here and historical info there when I needed to know. I didn't need writing gimmicks to keep reading as she'd given me enough heartfelt emotion to keep me interested. As for the ending, I’d like to say, I saw it coming, yet when it did, it was natural and right, the whole tale flowing in a surprising and satisfying conclusion. Based on this story, I can definitely say I’ll be looking for more of Carla’s stories.

I will tell you this much: you will fall in love with Deputy Ezekial Norcross on Page One. Gina Welborn excels at vivid imagery, characterization and apparently emotional manipulation! Don’t read this novella in public if you don’t like sniffling back tears. Zeke is in charge of finding new homes for a passel of orphans but as a single man, he can't adopt any (he’d take them all!) unless he has a wife. And of course he has his eye on war widow Marianne Plum, wife of the man he fought with and most respected. She is kind, practical and lonely…and bears such secret pain from her childhood, the idea of parenting paralyzes her. And Zeke knows it because of what her husband shared during the war.

Did I mention Zeke’s mom harbors a big dislike of the widow? You may think her a harsh woman for this but I know you’ll be touched by Gina’s handling of it.


Gina adds the cutest little girl ever and some heart-wrenching truths about the Civil War to this thoroughly charming tale. Gina, this is my favorite of all your novellas so far.

Orphan Olympia Paris is plenty old enough to have left behind the rambling home now known as Heath House where she and many others grew up, but she can’t part from the children who depend on her and each other as family. Yet they may not have a choice. There is no way she can pay the back taxes and the house will go to auction. With Christmas closing in, the next best thing to funding is the happy return of her dearest childhood friend, another orphan, Teddy Carstairs.


It’s rags-to-riches for Theodore, anxious to turn his hometown into a successful tourist destination again. The friendly devotion he shared with Olympia blooms into a strong attraction for both, though he never anticipated his business plans would hurt the woman he’s always loved.

Olympia is devastated. She thought she, of all people, knew Teddy, so how can he even consider tearing down the big house that so many generations have treasured.


Lisa Karon Richardson’s writing flows so skillfully, you’ll be surprised to find yourself at the end facing one of the sweetest closing scenes I’ve read. I loved the depth of these characters’ regrets and Lisa’s skill with real conflicts between two people who belong together.


First, the gushy part: I loved this novella, and I don’t know if Hallmark Channel has a Google alert to see what people are saying about them, but if they do, listen up. This would make a great Hallmark holiday movie.

At times poignant, at times funny, with a full serving of heart-warming, Comfort and Joy tells the story of Comfort House, a transitional home for kids who have outgrown the foster system but aren’t quite ready to support themselves on their own. Running this charity is Joy Benucci, who thinks she has enough on her plate--until she answers the door one day to find a drop-dead handsome lawyer…with an eviction notice.

That lawyer, Evan Lancaster, has an entirely different view of the foster system--and is pretty suspicious of Joy (Why? You’ll have to read it to find out. I don’t want to give away too much of the story!) But round the cast out with a news anchor with her own agenda, and a delightful group of ex-foster kids, and you end up with one enjoyable read.

But I do need to share my favorite line, the one that took my breath away. (I won’t give the context, because I don’t want to spoil the ending for anybody!
“She isn’t a show dog. Her pedigree doesn’t determine how she’ll turn out.”


What a reminder that, through God, we can be so much more than our upbringing. Such a powerful takeaway from an incredible novella! Well done, Jen!

There you have it. Four delightful romances to celebrate the Christmas season. And although falling in love doesn't happen only at Christmas, and we've only covered four such stories, people have fallen in love every day during the past two centuries and more.

And now that you've traveled through the years with us, we'd like to know...

What are your thoughts on book series that cross time boundaries? Do you have trouble switching from horse and carriage days to cell phones and jets? Do you like having the location as the series foundation, or do you prefer multi-generation series of the same family?

**The authors have kindly offered THREE copies of the book for THREE lucky readers this week! To enter the drawing, please leave a comment, including a way to contact you.**