A RELUCTANT BELLE By Beth White, Reviewed by Paula Shreckhise and Rebecca Maney 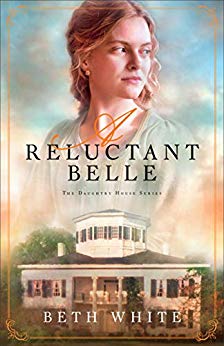 PAULA'S REVIEW:
A Reluctant Belle by Beth White is the second story in The Daughtry house series. It is best if you start with A Rebel Heart, Selah’s story, for a full experience and background information. A Reluctant Belle is about middle daughter, Joelle. The third will be A Reckless Love, Aurora’s story.

The Daughtry sisters have come through the Civil War but have lost their father. In order to provide for themselves, they are making their family mansion into a resort hotel in the midst of Reconstruction. In order to realize this enterprise, they have accepted the financial backing of distant relative and sometime enemy Schuyler Beaumont. He is from wealth and influence. Schuyler is a colorful character who delights in goading Joelle into arguments just so see her reactions. They may have more in common than they realize. Schuyler muses: “ The women, of course, had always been family— if, at times, of a distant and somewhat contentious variety, in fact, to his surprise, he realized that Daughtry House felt more like home than Beaumont House in Mobile. He might not own it outright, but he’d invested much more than his finances here. He suspected that his heart and purpose in life might actually be found in the soul of this place.”

Joelle Daughtry is a progressive thinker. She feels God prompting her to speak up for the underdog. She writes articles under a false name advocating for education for the freed slaves so they can vote in an informed manner and make their way in commerce intelligently.

While they each have their secrets to keep, Schuyler and Joelle are learning who they can trust and we see them maturing in their views and purpose in life.

Since the story is set in the Reconstruction period, Ms. White has dealt with the many injustices that followed the Civil War. Among them are Negro voting rights and education, simmering racial tension and the beginning of the KKK. She handles it with realism and tact.

There is plenty of intrigue and excitement as the characters navigate the turbulent times. The Southern humor and witty banter make this novel enjoyable as well as interesting and informative.

I recommend this book for those who like Civil War fiction with a clear faith thread and characters who don’t back down from their convictions.
*I received a complimentary copy of this book from the publisher on behalf of the author. I was not obligated to post a favorable review. All opinions are my own.*

REBECCA'S REVIEW:
"Sit down and tell me why you failed to keep my granddaughter from betrothing herself to that young Ichabod Crane."

Joelle Daughtry's accidental-on-purpose betrothal to the Reverend Gil Reese came about with no fireworks or heirloom ring attached; it just might have happened on the rebound after one of her most embarrassing, public humiliation moments, which of course included her childhood nemesis, Schuyler Beaumont. She intended to put as much distance as possible between herself and Schuyler; getting engaged seemed like a practical way to do it, until she finds herself weeping and praying beside a terribly distraught version of her family friend.

In post Civil War torn Mississippi, Joelle has manged to find a way to assert her independent spirit by using her gift of words; surreptitiously submitting potentially inflammatory articles, supporting the education of freedmen, to her local newspaper; thus earning extra money for her family and supplementing her efforts to fund a small school for members of the Daughtry House staff. When Schuyler's determination to solve his father's murder takes him deep into the web of clandestine Klan activities, Joelle and Schuyler come to an important crossroads; "Jesus, have mercy".

Quite possibly Beth White's best book to date, "A Reluctant Belle" skillfully navigates the treacherous waters of political and social discrepancies during the volatile years of reconstruction following the end of the Civil War. Adding a toe tingling romantic triangle to the mix was just the right ingredient!
*I received a copy of this book from Baker Publishing through Interviews and Reviews.

BackCover Blurb:
Impoverished Southern belle Joelle Daughtry has a secret. By day she has been helping her sisters in their quest to turn the run-down family plantation into a resort hotel after the close of the Civil War. But by night and under a male pseudonym, she has been penning articles for the local paper in support of the construction of a Negro school. With the Mississippi arm of the Ku Klux Klan gaining power and prestige, Joelle knows she is playing a dangerous game.

When childhood enemy and current investor in the Daughtry house renovation Schuyler Beaumont takes over his assassinated father's candidacy for state office, Joelle finds that in order to protect her family and her home, she and Schuyler will have to put aside their longstanding personal conflict and develop a united public front. The trouble is, what do you do when animosity becomes respect--and even love--if you're already engaged to someone else?
Available in digital ebook, paperback and hardcover:
Buy A Reluctant Belle at Amazon
Buy A Reluctant Belle at Christianbook.com
Posted by Debra E. Marvin at July 05, 2019