THE CROSSING AT CYPRESS CREEK by Pam Hillman, Reviewed by Paula Shreckhise and Rebecca Maney 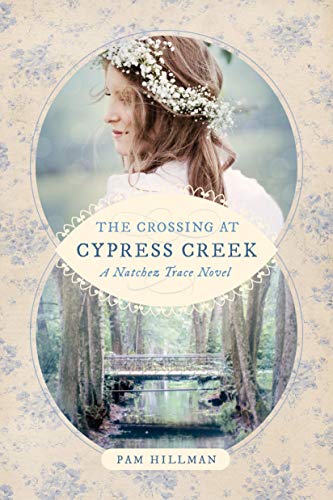 PAULA'S REVIEW:
The Crossing of Cypress Creek by Pam Hillman is book three in the Natchez Trace series.
The series is about the O’Shea brothers and this one focuses on Caleb.

Caleb O’Shea is a bit of a loner, having left his brothers in Ireland to take to the sea and travel the world. He finds himself at Natchez Under The Hill and face to face with his brothers. Unsure of their reaction, he is surprised when they welcome him back as the prodigal returned! These brothers remind me of the verses in Joshua that talk of MIGHTY MEN OF VALOR who run toward the danger , not away from it.
Alanah Adams is a strong young lady. She, her sister and a friend have been left to fend for themselves in the woods along the perilous Natchez Trace in August 1792. Their father is a legalistic parson travels in order to minister to settlements far away. Alanah cleverly disguises herself as a crazy lady in order to protect the females left alone at home.
The Trace is a dangerous but necessary place to travel for commerce. Highwaymen and River Pirates accost almost everyone.

Ms. Hillman builds a credible world of early America along the Natchez Trace. There is excitement by the bucketful. Strong characters necessarily populate this story. The heroine is resourceful, capable and clever. She tries to reconcile her relationship with God with the harsh God she sees through her father’s preaching. Caleb is a lost brother who wants to connect with family and then go his own way again. But will he change his mind when he encounters forgiveness from his family and meets the intriguing and puzzling Alanah?

This whole series has captured my interest with its romantic setting and interesting history. Ms. Hillman is a masterful storyteller. She incorporates spiritual truth into the journeys of her characters.

*I received an ARC of this book from Tyndale Publishers on behalf of the author. I was not required to give a favorable review. All opinions are my own.*

REBECCA'S REVIEW:
" . . . .those dark eyes never left hers. They narrowed slightly as if he was trying to place her."

Not as addled as she would have folks to believe that she is, Alanah Adams smoothly changes roles depending on her circumstances; she can dress and act like the consummate lady or she is perfectly comfortable spreading ashes all over herself to portray an aura of mental confusion. It's safer that way in the dangerous territory surrounding the small river town of Cypress Creek, where men take every advantage over beautiful, unattached women. It's become a way of life, until one day a man recognizes both of her personas and is determined to find out what she is up to.

When Caleb O'Shea stumbled into Natchez, he never expected to be reunited with his brothers. He also never expected to become caught up in the life of Alanah Adams and her sister Betsy. Life is blatantly brutal in this area; river pirates run rampant and local citizens find it impossible to defend themselves and their families. When Alanah's worst fears become reality, Caleb is faced with a life altering decision; is his life of wandering over, or has his heart finally found a place to call home in the remote little town of Cypress Creek?

Readers of the Natchez Trace series will be dully impressed with this lovely, intriguing conclusion to Pam Hillman's series.

*I received a Net Galley copy of this book through Just Read Publicity Tours. I also purchased a print copy.

BackCover Blurb:
Sailing and soldiering around the world has taken Caleb O’Shea far from his native Ireland, so he never imagined that a promise to see a fellow crewman safely home would practically land him on his brother’s doorstep. After spending years away from his family, Caleb isn’t certain what kind of reception he will receive when he steps foot in Natchez, Mississippi. The one thing he knows for sure is that he won’t stay long.

Since her sister was kidnapped by river pirates six months ago, Alanah Adams has taken special care to avoid drawing attention to herself. Those living in the rough-and-tumble settlement of Cypress Creek might even think she’s addled. But when she stumbles into Caleb and his friends in Natchez, she appears to be the picture-perfect lady.

Caleb only catches glimpses of the mysterious and beautiful Alanah before she disappears. But a chance encounter with her at his brother’s logging camp near Cypress Creek leaves him uncomfortable at the thought of the young woman traversing the dangerous area alone. At a crossroads in his life, Caleb must decide whether he wants to give up the worldly adventures he’s been seeking for one closer to home.