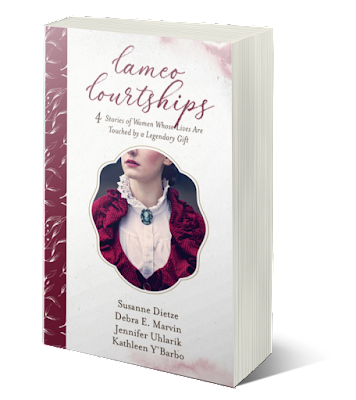 Travel across generations, as four members of a distinctly diverse family, cautiously and sometimes reluctantly, accept guardianship of a treasured family heirloom meant to bestow love and adventure upon its wearer.

Pinned Above Her Heart - Clara Newton is reunited with a beloved childhood friend, only to be thrust into the throes of a dangerous crime investigation; one that could not only ruin her family's future, but her own as well. Can a lovely piece of jewelry have anything to with her change of fortune?

Taming Petra - Petra Jayne Breaux has intentionally hidden her true identity underneath shorn hair and a penchant for wearing trousers when an heirloom gift arrives, only to disappear into the bowels of a despicable local institution. Now, Petra must decide whether or not its retrieval is worth her reliance on the new town preacher, in order to get it back.

Meet Me at the Fair - It's a clash of the Pinkertons, as Ethan Butler and Elizabeth Newton play cat and mouse in New Orleans during the 1884 World's Fair and Cotton Exposition. At stake is a valuable piece of jewelry carefully stowed away in a hotel safe.

Lending My Heart - Roberta Hart is adamant about breaking with convention, shedding the cloak of upper class privilege; starting with a job as the director of the new Carnegie Library's children's department. There's only one obstacle; a handsome Scottish administrator and a marriage that's been arranged since she was eight years old. That actually makes two obstacles, doesn't it; how can a lovely cameo possibly change all of that?

" . . . .but one is its custodian, preserving and protecting it for those who come after. "

A delightful series of stories!

*I received a digital copy of this from from NetGalley in conjunction with Just Read Publicity Tours. I also purchased a print copy. The opinions stated above are entirely my own.

“Four stories of women whose lives are touched by a legendary gift.”

These four stories are about a cameo that was gifted to Letitia by Queen Victoria to be passed down when the time was right.

“Pinned Above Her Heart”by Susanne Dietze takes place in Pittsburgh, Pennsylvania in 1851
What a special gift that Aunt Letitia has given Clara Newton! A cameo that belonged to Queen Victoria! Is the legend true that Clara will meet her true love soon after wearing this beautiful brooch? Clara longs to write for a woman’s magazine. Her childhood friend Byron Breaux is a journalist caring for his three young siblings after their parent’s deaths. Can they both benefit from working together on an article that seeks to find out who is behind a theft of antiquities? Will their friendship turn into something long lasting?

Ms. Dietze spins a tale as mysterious and beautiful as the work of art that Clara’s father makes at his glassworks.

“Taming Petra” by Jennifer Uhlarik is set in Cambria Springs, Colorado Territory in 1875.
Buckskin Pete Hollingsworth, really Petra Jane Breaux, is in her element in the West. However, her parents back East are unaware of her cowgirl ways. She is a feminine powerhouse and encounters more trouble when her heirloom cameo is stolen and she has to deal with unscrupulous men. Pastor Owens claims he isn’t worthy of a woman but vows to help Pete recover the precious item. This was a fast moving story that showed how people’s perceptions change. Through all the dangers they learn to rely on God.

“Meet Me At The Fair” by Kathleen Y’Barbo had all the elements that draw me to a story. A World’s Fair in New Orleans in 1885 and Pinkerton Agents!
What happens when a Lady Pinkerton doesn’t use her assigned cover name so her fellow Pinkerton agent, whom she thinks she has never met, tries to connect with her? Let the fun begin! When the cameo goes missing , do their assignments converge? Ms. Y’Barbo concludes with ‘Bent History and Fun Facts in the notes.

“Lending My Heart” by Debra E. Marvin concludes the stories back in Pittsburgh in 1895.
If you love Scottish accents, you will be fond of Russell Smart. He is brought to Pittsburgh to oversee the Carnegie Library and choose an administrator. Roberta Hart is a volunteer in the Children’s department and hopes to secure the job. Ms. Marvin has brought interesting facts to this story. I had no idea that a Carnegie Library was much more than a library. It was a cultural center with a museum that included a dinosaur skeleton!

This was an exceptional story about how two people followed their hearts. Roberta cares about children and their access to good reading material. She is concerned about an arranged marriage that she nor the man involved have a desire for. Russell Smart is a well educated ward of a wealthy couple and is all business when it concerns the library. Coming from poverty, he soon finds a way to help the poor children he encounters.

This was a delightful book with a great storyline that seamlessly fit together.

BACK COVER BLURB:
A Family Heirloom Inspires Romance
In 1851, a special cameo is gifted by Queen Victoria to Letitia Newton, who though considered an old maid, meets the perfect gentleman minutes after donning. Told by the Queen the cameo is to be shared, Letitia gifts the "Victoria Cameo" to a woman in her family, hoping adventure and romance will follow each of its subsequent wearers.

LENDING MY HEART by Debra E. Marvin
1895 – Pittsburgh, PA
The arrival of a handsome Scottish administrator ruins Miss Bertie Hart’s dream to oversee the new Carnegie Library children’s department. Yet bristly Mr. Russell Smart’s working-class determination and his love of books make him the perfect partner to better the lives of Pittsburgh’s poor. As for a partner in life? Not even her Victoria Cameo can narrow the social chasm he and her father keep between them.

a Rafflecopter giveaway
Posted by Debra E. Marvin at July 21, 2019