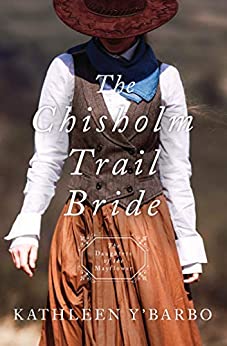 This story is a great Western yarn that starts and ends on the Chisholm Trail. Eliza and Wyatt are childhood friends. An incident breaks them apart but they do not forget each other. A little deception, a few lies and the past looms.

The characters are well developed. Eliza is a bit headstrong and can make snap decisions. Wyatt is patient and has made a career for himself as detective John Brady. A likable secondary character is barely out of the nursery cousin Justine who follows Eliza around. She is nosy and proves that sometimes eavesdropping can be helpful.

The book would not be complete without a little mystery, excitement and romance, which are all done in a fresh way. I did not see some things coming! A very enjoyable book from the Daughters of the Mayflower series.
*I purchased a copy of this book. All opinions are my own.*I give this 5 stars. Light but strong faith thread.

BACK COVER BLURB:
A Series for Lovers of History, Adventure, Romance, and AncestryBarbour Publishing offers a series for fans of all things related to history, romance, adventure, faith, and family trees.
Stubborn Hearts Clash on a Cattle DriveEliza Gentry’s pursuit of marriage to the son of her family’s sworn enemy has cost her greatly. Furious at his daughter’s choices, her father sends her off with the cattle drive heading toward Fort Worth and the Barnhart ranch, but under the watchful eye of Wyatt Creed, a Pinkerton man he has hired to see to her safety. With danger at every turn—not the least of which to his heart—can Wyatt Creed keep his focus with Eliza Gentry around? Is the Chisholm Trail a place for falling in love or a place to die at the hands of cattle thieves?

Join the adventure as the Daughters of the Mayflower series continues with The Chisholm Trail Bride by Kathleen Y’Barbo.