CLOSER THAN SHE KNOWS by Kelly Irvin, Reviewed by Rebecca Maney 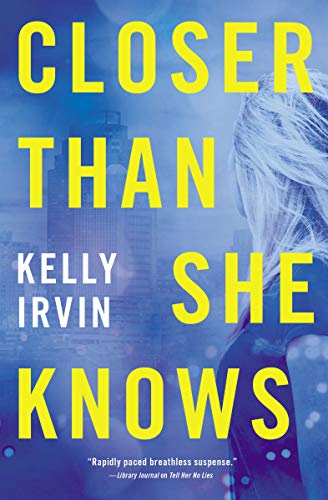 "The Triple S stands for Shoot, Stab, and Strangle."

Teagan O'Rourke finds herself living and breathing in the middle of a nightmare. A cold, calculating killer is not only toying with her, but killing dear friends and acquaintances at a dizzying rate. While her family members use their law enforcement connections to find clues, Teagan's dearest friend Max maintains a steady presence at her side. If only . . . . . if only things could look different when Teagan gazes into her future.

"Closer Than She Knows" moves at a frantic, almost frenzied pace. A lot goes wrong for a lot of people. There are more dead ends than clues, and more to fear than fear itself. Even though Teagan and Max readily admit their flaws, they demonstrate an unshakable determination to forge ahead with a "them". For as the author concludes, "Scripture promised joy in the morning. It had arrived right on time."
*I purchased a copy and was under no obligation to provide a positive review. 3.5 stars

BackCover Blurb:
A serial killer bent on revenge . . . and striking too close to home.

Teagan O’Rourke has always loved murder mysteries. In her job as a court reporter, she has written official records for dozens of real-life murders. She’s slapped evidence stickers on crime scene photos. She’s listened to hours of chilling testimony. But she’s never known the smell of death. And she never thought she might be a victim.

A young police officer is murdered just inches away from her, and then a man calling himself a serial killer starts leaving Teagan notes, signing each with the name of a different murderer from her favorite mystery novels.

Panicked, Teagan turns to her friend Max Kennedy. Max longs for more than friendship with Teagan, but he fears she’ll never trust someone with a past like his. He wonders how much of God’s “tough love” he can take before he gives up on love completely. And he wonders if he’ll be able to keep Teagan alive long enough to find out.

As Teagan, Max, and Teagan’s police officer father race to track down the elusive killer, they each know they could be the next victim. Desperate to save those she loves, Teagan battles fears that once haunted her in childhood. Nothing seems to stop this obsessed murderer. No matter what she does, he seems to be getting closer . . .