A RECKLESS LOVE by Beth White, Reviewed by Paula Shreckhise and Winnie Thomas 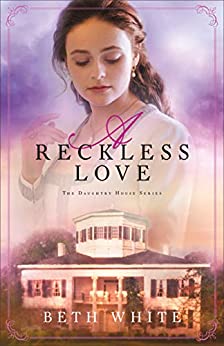 PAULA'S REVIEW:
Sassy Aurora Daughtry meets US Marshall Zane Sager and sparks fly in this third and final book of the series.

Aurora: Fixing people was not as simple a procedure as one might suppose, Aurora concluded, but at least she and Bedelia had reached what might be called an armistice.

Zane: Now he was... content. God had been good to rescue him from those privations, none of which he deserved exactly, but which constituted the bounds of living as a sinful, prideful human being.

Zane Sager has a dangerous and important job ahead of him. He must hide and protect witnesses in an upcoming trial. Aurora Daughtry, new owner of a boarded up saloon, may just be the answer to a sticky situation.

Aurora is the youngest of three sisters who are refurbishing their plantation during Reconstruction in order to provide employment for liberated slaves.

This story is full of danger and intrigue but has light moments as well. The banter between Aurora and Zane is pretty cute. They were brought up to have faith and manners in a world where turmoil churns. They grow in grace and realize that God sees their worth. They each have a good heart and want to do the correct and honorable thing.

A speech Zane gives in the midst of a scary situation sums up what was needed in the aftermath of the Civil War and should be heeded in our present National unrest:

Quote: Think about what you just said! If the law is not on your side, then whose side are you on? Anarchy? Violence? Screaming and mobbing and tearing each other apart make you less than human. If you don’t like the laws, vote to change them! That is what Americans just fought a war over...the right for every man to have an equal say in his destiny. In the meantime, give one another room to disagree.... Don’t let a handful of men with the personal agenda, like greed or revenge or hunger for power, twist us against one another. Don’t let them destroy our humanity!

Such a timeless book to read in light of today. It is both entertaining and relevant.
5Stars. Strong Christian content.
*I received a complimentary copy of this book from Revell on behalf of the author and the Revell Reads program. I was not required to give a favorable review. All opinions are my own.*
WINNIE'S REVIEW:
A Reckless Love is the last book in the Daughtry House series by Beth White. This book stars the youngest Daughtry sister, Aurora, in all her spunky, independent, determined glory. I love how each sister has her own personality that shines through the stories. The hero of this one, Zane Sager, is appealing and impressive in his honor, courage, and unassuming way. The relationship between Zane and Aurora was amusing and added a sense of fun to the book.

I enjoyed the setting in the south after the end of the Civil War and learning more about this slice of history. The end of the war certainly didn’t end the suffering on both sides. I admired the resourcefulness of the people through their many trials.

Many of the characters in this book appeared in the first two in the series, so it was fun to see what they were doing. I did have a bit of difficulty trying to keep everyone in the tale straight, as there were many secondary characters, and it had been a while since I’d read the other stories. Although this could be a standalone book, I would suggest reading the other two books first to get full enjoyment out of it.

Threads of healing, forgiveness, and love of family add inspiration and depth to the tale and add to the satisfaction of it. I will definitely be looking forward to more of Beth White’s writing.
*I voluntarily reviewed a complimentary copy from the author/publisher. All opinions are my own.

BackCover Blurb:
In the fine tradition established by her Southern grandmama, Aurora Daughtry has recently orchestrated the marriage of her eldest sister and facilitated her middle sister's engagement. She also rejoices in her part in transforming the family's dilapidated plantation manor into a luxurious and lucrative resort hotel. Just when it seems there is nothing left to absorb her considerable talent for managing people, in walks federal deputy marshal Zane Sager.

But Zane is not at Daughtry House for a vacation. He's tracking a killer and collecting two key witnesses to a federal judge's murder.

Aurora takes it upon herself to disabuse the cynical lawman of his conviction that the world--and God in particular--is out to get him. But just as she's on the verge of cracking Zane's defenses, the man he is after reminds him that no one he loves is safe. Ever.

Award-wining author Beth White closes out her Daughtry House series with this exciting and emotional tale of two strong-willed people who may have met their match.