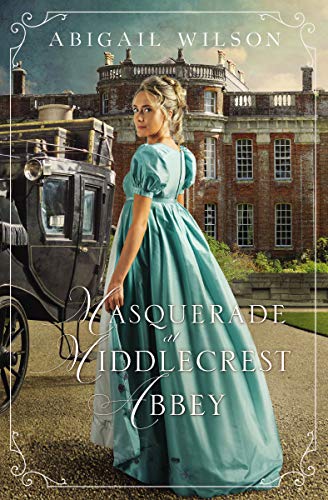 "All I ask is for you to feign affection in pubic, my dear, and we shall get on quite well with one another. Think of our marriage as a rather pleasant masquerade."

Actually, Elizabeth Cantrell's masquerade marriage was turning out to be a rather dangerous one, for her new husband was a British spy; his foiled disguise as a highwayman having been compromised following an horrendous coach accident which literally threw them together under compromising circumstances. And so it was, that a young unwed mother laid claim to the title of Lady Torrington. If it were only that simple.

First of all, it becomes apparent that Lord Torrington's deeds have followed him home. On the eve of his oldest daughter's wedding, unspeakable tragedy strikes his household and everyone on the vast estate falls under suspicion. Furthermore, as Adrian and Elizabeth join forces to expose the traitor in their midst, what began as a convenient relationship builds momentum, to the point that Elizabeth must honestly remind herself, "love had never been part of our arrangement, and I'd best remember that".

What perfect momentum! This intriguing example of historical suspense hosted a curious beginning, while maneuvering its way past tragedy, family secrets, and a tremulous romance; moving intentionally forward towards an heroic ending and a full fledged love story. Abigail Wilson has just staked her claim in Regency mystery.
*I purchased a copy and was under no obligation to provide a positive review. 3.5 stars \

BackCover Blurb:
In this new Regency romance, a young unwed mother must protect her heart from the charms of her convenient new husband, Lord Torrington. She is not, however, prepared to protect her life.

When the widowed Lord Torrington agreed to spy for the crown, he never planned to impersonate a highwayman, let alone rob the wrong carriage. Stranded on the road with an unconscious young woman, he is forced to propose marriage to protect his identity and her reputation, as well as his dangerous mission.

Trapped not only by her duty to her country but also by her limited options as an unwed mother, Miss Elizabeth Cantrell and her infant son are whisked away to Middlecrest Abbey by none other than the elder brother of her son’s absent father. There she is met by Torrington’s beautiful grown daughters, a vicious murder, and an urgent hunt for the missing intelligence that could turn the war with France. Meanwhile she must convince everyone that her marriage is a genuine love match if her new husband has any hope of uncovering the enemy.

Determined to keep her son’s true identity a secret, Elizabeth will need to remain one step ahead of her fragile heart, her uncertain future, and the relentless fiend bent on her new family’s ruin.