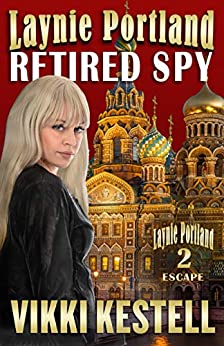 After reading The prequel-Laynie Portland, Spy Rising- I was anxious, but a little wary of reading Laynie Portland, Retired Spy. I was not sure how the author would handle a spy that used her body as part of her cover. However, Laynie is not a Christian... yet. The author handles the unsavory parts of the spy lifestyle with tact and realism. Her lifestyle was a springboard to show how God doesn’t give up on people. God tried to woo Laynie through her adoptive parents and upbringing. God put Christians in her path and many scripture verses on the attributes of God and... how He loved her actually haunted Laynie. A very strong Gospel message was contained in this story.

On the spy craft side, this was a very exciting and entertaining look at what kind of life Laynie led and what she had to endure when multiple groups were after her. The author even managed to put her on a hijacked plane on September 11.

In this book, Laynie is beginning to realize what is really important in life, including the family she is trying to protect and maybe God!

This story is a recent finalist in the Carol Awards.

A very engrossing and exceptional spy story that reminds me of a favorite spy character, Jason Bourne. I look forward to reading the next book in the series.
*I won this book from the author as part of the ACFW book club. I was not required to give a favorable review. All opinions are my own.* 5 stars and a strong faith thread.


BackCover Blurb:
“Retirement” means something altogether different to a spy. It means someone in authority over you has decided that “coming in from the cold” is out of the question. It means you’d better run.

Laynie Portland has masqueraded as Swedish citizen Linnéa Olander for more than two decades, the last seven years as companion to Vassili Aleksandrovich Petroff, senior technology advisor to the Secretary of the Russian Federation’s Security Council.

Life as Petroff’s mistress is lonely and difficult, even brutal, for Petroff has a pathological need to master what is “his.” But the woman Petroff knows as “Linnéa” is not the compliant, deferential woman he believes her to be. She is Laynie Portland—spy extraordinaire—and Laynie has stolen a wealth of secrets from Petroff and fed the treasure to her Marstead agency handlers.

As Petroff’s abuse intensifies, Laynie fears for her life, and she petitions her agency to pull her out. Instead, her agency declares that she is too well-placed to decommission. Laynie is dismayed to learn that her Marstead chain of command would rather risk her death under Petroff’s hand than lose the valuable intel she provides.

Out of options and faced with no viable alternative, Laynie runs.

Enraged by her betrayal, Petroff vows to capture and punish her, a certain death sentence. And when Laynie disobeys orders, Marstead issues her a “retirement package”—a short walk off the deck of a ferry into the icy black rollers of the Baltic Sea.

Pursued by Russian assassins and hunted by her own agency, Laynie scrambles, fights, and claws her way toward freedom—although she knows that it is only a matter of time before her pursuers overtake her. Desperate and despairing, Laynie is stunned to sense a higher presence at work, acting on her behalf. Could it be the God in whom her sister, Kari, trusts?

No. Why would he help me, Laynie asks herself, given the life I have lived?