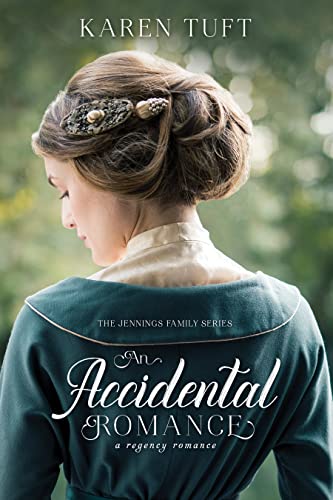 Poor Rebecca Jennings! She’s been so looking forward to her first London season but ends up breaking her ankle when startled by her new neighbor, Ben Fortescue. Such an unfortunate happening looks brighter when Ben decides he needs to try to make amends. These main characters are perfect for each other, and I enjoyed seeing their relationship grow and change throughout the tale. Secrets about Ben’s past are slowly revealed which cause some problems and add suspense and intrigue and kept me turning the pages.

It was delightful to see some of the characters from author Karen Tuft’s other books in the series show up. Although this book is part of The Jennings Family Series, it can easily be read as a stand alone.

I love Regency stories, and Karen Tuft is one of my favorite authors in this genre. She creates such delicious characters and scenarios, and I can count on a charming story each time. I’m looking forward to reading more from this talented author. 4.5 stars
*I voluntarily reviewed a complimentary copy from Covenant Communications. All opinions are my own.

BackCover Blurb:
Rebecca Jennings’s first London Season has been absolutely ruined, and one person alone is responsible: Mr. Ben Fortescue. If her new neighbor hadn’t startled her, she would never have broken her ankle, leaving her bored and frustrated at home in the country while her sister enters the London Season alone. Although, it was rather gallant of him to carry her home . . .

For his part, Ben feels terrible about the role he played in Miss Rebecca Jennings’s accident. In the days that follow their first disastrous meeting, he finds himself inexorably drawn to the surprising young woman—first out of guilt and then out of a stirring affection. But Ben hides a secret: he has not been completely forthright about his identity or about the dark secrets of his past that would make it impossible for romance to blossom with Miss Jennings. Despite his love for her, he knows he must let her go.

With her ankle finally healed but her heart now broken, Rebecca is left with little choice but to throw herself into the Season. With eligible men circling this late addition to the Marriage Mart, it seems that Rebecca will have no shortage of suitors. If only her heart were free to give.
Covenant Communications, December 2021
Available in digital ebook and paperback:
Buy An Accidental Romance at Amazon
Posted by Debra E. Marvin at December 06, 2021