Susanne Dietze
Yes, I know. The Protestant Reformation was not an era.

When I told my husband that I’d come up with the idea of posting on the Reformation during “To Era is Human” week, he smartly reminded me that the Protestant Reformation was not an era. It was a movement.

Well, I’m going to talk about it anyway. While some may view the Reformation as a time of heavy theology or (perhaps) boring history, I see it as a thrilling time of change in the Church which has affected each of us, Protestant or not. If you own a Bible in your own language, have never paid money to earn forgiveness of sins, or have a married pastor, you have the work of 16th century Reformers to thank. But their work was not easy, nor safe.

The participants of the Reformation lived in a time of intrigue, danger, and (much to my sentimental pleasure) even some romance, too. Some Reformation-period factoids are downright scandalous.

Here’s a bit of what I mean:

From Germany to Scotland, England to Switzerland, many theologians and average joes questioned what they regarded as false doctrines: the authority of the pope, the requirement of celibate clergy, and the sale of indulgences (payments to get into heaven), among other things. When Pope Leo X declared his intention to fund the building of St. Peter's Basilica with monies raised from the sales of indulgences, a monk named Johann Tetzel was commissioned to travel throughout Germany, hawking indulgences with all the gusto of a street vendor. Tetzel promised that “whene’er a coin in coffer rings, a soul from purgatory springs.”
Tetzel’s mission initiated outrage as well as political intrigue. Archbishop Albert of Mainz, in whose territory Tetzel was working, wanted some of the indulgence income to pay off a bank debt. Elector Frederick the Wise, however, banned Tetzel from Wittenburg so his people’s money would line his pockets, not the pope’s. Martin Luther had enough, and it wasn’t long before the times, they were a' changin’.

Image via Wikipedia
Church doors often served as bulletin boards back then. Though some scholars dismiss the story as legend, it’s nevertheless probable that Martin Luther nailed a copy of his Ninety Five Theses to the door of the Wittenberg Castle's Church in 1517, inviting debate. (Needless to say, he got it.)


Smuggling nuns was a capital offense, punishable by both church and state. (Am I alone, or doesn’t it seem like a good idea to have a law against smuggling people?) Therefore, merchant Leonard Koppe faced grave danger the night before Easter, 1523, when he helped twelve nuns escape their cloister by hiding them in the back of his wagon. Among them was Katharina von Bura, the future Mrs. Luther. 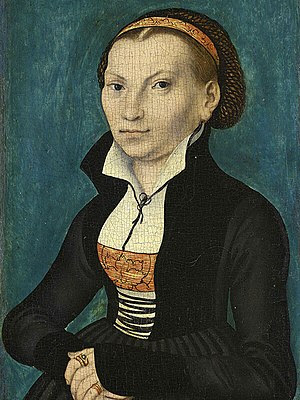 Image via Wikipedia
Noting that the apostles had married, leading reformers determined they should wed, too, to serve as examples of clerical marriage. The nuns who’d escaped in Koppe’s wagon either returned home or made excellent candidates for clergy wives. All but one. Katharina von Bura dismissed at least three suitors before she suggested Martin Luther for herself. He agreed, and wrote, “There is a lot to get used to in the first year of marriage. One wakes up in the morning and finds a pair of pigtails on the pillow which were not there before.” (By many accounts, the Luthers enjoyed a healthy marriage, and a famous one. When their firstborn got his first tooth, it was a national event.)

Water was a suspect beverage, so brewing beer was as much a part of a housewife’s daily routine as laundry or baking. Luther enjoyed Katharina’s home brew very much, and had a large stein in which to drink it. The stein was decorated with three rings, representing the Lord’s Prayer, the Ten Commandments, and The Nicene Creed.

It’s been noted that much of the work which bore fruit during the Reformation was accomplished in taverns. Englishmen Thomas Bilney, Edward Fox and Robert Barnes met at the White Horse Tavern to discuss their ideas. (Other notable Christians who’ve gathered for intellectual discourse at a pub? C.S. Lewis and J.R.R. Tolkein, at the Eagle and Child in Oxford.)

Image via Wikipedia
Thomas Cranmer, Archbishop of Canterbury and author and compiler of the first two Books of Common Prayer, believed in clerical marriage. Henry VIII did not. Yet Cranmer fell in love with a fair German maiden, Margaret. Despite the danger, he married her anyway, although in secret. Rumor said that Margaret hid in a box to escape detection, though some historians dismiss this as a legend explaining how well Cranmer hid her existence. Others believe Cranmer’s marriage was an open secret, but nevertheless, many of Cranmer’s enemies never caught on.

John Calvin determined to marry too, though he didn’t have a lady in mind. Friends recommended a certain noblewoman for his consideration, and though he agreed, the match never came about. He later said he wouldn’t have wed her “unless the Lord had entirely bereft me of my wits.” He found happiness with widow Idelette de Bure.

Church music began to change during the Reformation. The first protestant hymn (“The Only Son from Heaven,” 1524) was written by a woman, Elisabeth Cruciger, who was also married in the first recorded protestant wedding. 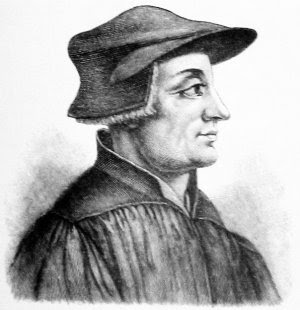 Image via Wikipedia
Controversy surrounds the musical legacy of Huldrich Zwingli. Some have interpreted his teaching to indicate he was against music in church, but other scholars claim it was only chants to which he was opposed. Either way, Zwingli enjoyed music. He could play the harp, violin, dulcimer, and flute. Sometimes he would play for local children, and earned the name “the evangelical lute-player and fifer” from his enemies.

Many Reformers had prices on their heads. Some died in poverty; others, like Cranmer, were executed. Reformation was not a bloodless endeavor. The 16th century saw a Counter Reformation, years of war (the Thirty Years War is said to have killed over 25% of Germany’s population), and unrelenting flux as individuals continued their quest for religious freedom. A few of these folks boarded a ship to find a place where they could worship in their own way: here in America, we call these early New England settlers Pilgrims.

The Reformation continues to shape us, no matter our denomination. The right to worship in our own way, to read Scripture and interpret it ourselves is fruit borne from the work of this astonishing period. Even if it isn’t technically an “era.”
Sources:
Chadwick, Owen. The Reformation. Penguin, 1964.
http://www.anglicanlibrary.org/latimer/index.htm
http://www.reformationtours.com/site/490868/page/204052
http://chi.lcms.org/katie/6.asp
http://www.oldlutheran.com/news/allroses.html
http://schools-wikipedia.org/wp/t/Thomas_Cranmer.htm
http://www.medieval-life-and-times.info/medieval-religion/protestant-reformation.htm
http://www2.elca.org/wittenberg/sabbatical/ElisabethCruciger.html