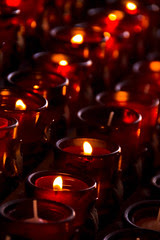 
Saturdays normally serve as days for book recommendations here at the Inkwell, but today is the ninth anniversary of the terrorist attacks committed on September 11, 2001. Our hearts wouldn’t let us allow the day to pass without making mention of the tragedy.

We all remember where we were when we learned of the terrorist attacks. In that instant, something altered in me. Some might suggest my innocence was shattered, but I don’t think so. It didn’t take 9/11 or wars and rumors of wars to teach me that life was fragile and my arms were too feeble to protect those I love.

But 9/11 was a bit different. What I experienced was more like an internal earthquake. The fault line already existed within me, hidden and deep, but on that day, it made itself known in a painful rift.

We all have our memories of 9/11. Mine flood back with the smells of fresh asphalt, since our street was being repaved, and Elmer’s glue, since I worked on as many cut-and-paste projects as necessary to keep my preschooler disinterested in turning on the TV. I remember starting that sultry morning feeling a bit better rested than usual, because my husband got up with our newborn two hours earlier so I could sleep. And in the nine years since then as I’ve watched my baby grow, I’ve often thought of the children his age, born after their fathers died in the attacks, who are now dotted through dozens of fourth grade classrooms, living reminders of love and loss.
I also return to 9/11 in staircases. I knew a young woman who was in the World Trade Center at the time of the plane crashes. Her account of escaping down the stairwell is one that haunts me every time I choose to forsake a building’s elevator in favor of exercise. When I take the stairs at the hospital or a parking garage, my mind goes to that young lady’s description of her escape, one narrow concrete stair at a time.

The memories come entwined in the gruesome clutches of fear.

I don’t think I’m alone. Since that day, fear has taken root in the fissures of our psyches, individual and national. It’s nothing new, perhaps, as fear has long played a role in advertising medications that we’ll surely die without, or selling us alarm systems or nuclear-fallout bunkers. But fear is perhaps a bit more front and center in society these days, socially acceptable, and there’s plenty to be hysterical about. Financial crises, global warming, war, and of course terrorism. Always, since 9/11, terrorism. In school, my children are now taught lockdown procedure in addition to fire drills, in the event that a weapon-wielding attacker storms the campus. Just in case.

The world may be fragile, ugly, and scary, but it’s also full of joy, wonder, and love, and God’s arms are strong enough to protect, preserve, and save. And even though terrible things have happened to us and those we love, God doesn’t want us to fear such things. He wants us to trust Him.

In his book Fearless, Max Lucado urges us to recall God’s instructions that we not be afraid. To take courage, take heart, and trust in God, even when we’re scared to death.

…The words call for additional attention, special focus, extra resolve. Isn’t this what Christ is asking of us? In this dangerous day, on this Faberge-fragile globe, with financial collapse on the news and terrorists on the loose, we have every reason to retreat into bunkers of dread and woe.
But Christ says to us, “See to it that you are not alarmed” (NIV).
"Keep your head down and don’t panic” (MSG).
“See that you are not troubled” (NKJV).
“Be faithful until death, and I will give you the crown of life” (Rev 2:10 RSV).
Make sure the hull of your convictions can withstand the stress of collisions.
As we grapple to make sense of the tragedies we’ve seen and experienced, we mustn’t forget God loves us. He’s promised to never leave or forsake us. It’s our job to shore up our faith, so no matter what comes, we trust that He reigns over everything. Even when we’re afraid.