The Invasion of the Body Snatcher

by Lisa Karon Richardson
Today is officially Halloween and... well okay I'm out of other excuses. Sadly this is just the way my mind works.
I was recently reflecting on this passage of scripture: If ye were of the world, the world would love his own: but because ye are not of the world, but I have chosen you out of the world, therefore the world hateth you. (John 15:19)
It hit me anew that when we are transformed by the Holy Spirit we are not just remodeled like an old house. Scripture puts it this way: Therefore if any man be in Christ, he is a new creature: old things are passed away; behold, all things are become new. (II Corinthians 5:17)
We are entirely new creatures. Now this is where my mind started down a rabbit warren of its own. It occurred to me that this new creature is entirely alien to the world. Are you still with me?
Do you see what this means?
I am an alien! If you are still bothering to read this then I would venture to guess that you are also an alien. 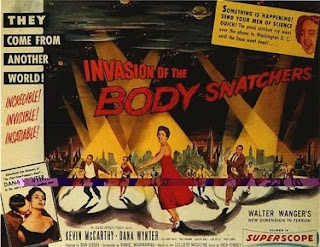 We are in this world but we are not of it. It is sort of like a very positive version of Invasion of the Body Snatchers. Physically I looked the same way before I received the Holy Ghost as I did afterward. But inwardly there was birthed a new being. A babe in Christ.
Okay so it may sound a little creepy to the uninitiated, but this change that happened to me isn’t negative in any way shape or form. It's the best thing that could ever happen. You see, God only looks for willing ‘victims’. We have to volunteer. He won't force the decision on us.
But may I say this change is incredible.
Unregrettable.
I wouldn't go back for anything. I'm absolutely happy being a stranger in a strange land.
Here's the kicker, unlike other alien races you may have seen on TV or in movies, we’re not here to destroy the human race, but to preserve it.
We're trying to snatch people from the jaws of hell. Think of us as an advanced race with technology critical to survival. We know the secret to eternal life-and it is a gift freely given.
I'll totally understand if I'm alone, but if you've ever felt as if you were an alien species, I'd love it if you'd share in the comments. Aliens Unite!
Posted by Lisa Karon Richardson at October 31, 2010