Here in Texas, we’re hurricane veterans, although Central Texans like me are on the receiving end of hurricane chaos, not the evacuating end. During the crazy, disorganized evacuations that followed Rita and Ike, literally thousands of evacuees made their way here.

In the Wingate family, we became the recipients of numerous family members, traveling on what we have lovingly come to call “hurrications.” There simply is no easy and orderly way to move thousands of people inland and no way to ensure that evacuees abandon homes and businesses on the coast in time to reach shelter before the storm closes in. During every evacuation, some people are trapped in their homes, and some are simply trapped on the road, at the mercy of strangers and the storm. These exoduses of people, pets, and belongings have been frightening, frustrating, challenging, and at times oddly wonderful. When so many are on the road seeking shelter, the worst, but also the best qualities of humanity come to the surface. 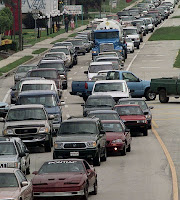 In our own family, we’ve enjoyed amazing moments of friendship, family reunions, and chances to share a food and space with strangers from other places. We’ve traded stories and recipes, laughter and tears.

The idea for my February, 2011 book from Bethany House, Never Say Never, literally blew in on the wind with evacuating Wingates. One thing we have learned about hurricanes is that the paths are never predictable. Storms waver, hesitate, speed up, slow down, and sometimes change course unexpectedly. Evacuations can change and develop quickly.

What better way for my three favorite girlfriends from the fictional town of Daily, Texas to break out of a rut, than for a trip to the coast to land them smack in the middle of a sudden and chaotic hurricane evacuation?

If that doesn’t break the girls out of their rut, nothing will!

There’s an underlying theme in Never Say Never that applies to more than just hurricanes. The book is not only about the fact that we really are, at times, our brother’s keepers, but it’s also a story about letting go of plans and preconceived notions about who we are and what our lives should be. Sometimes when a storm blows us off course, when we think we’re completely lost, we’re really not lost at all. Often we find that we’re right where God wants us to be.

For more information about Never Say Never or any of my books, stop by my e-home away from home, http://www.lisawingate.com/. I’m also on Facebook and Youtube, of course. Isn’t everybody? By signing up for the newsletter on http://www.lisawingate.com/, you can enter a monthly drawing for a free autographed book and receive occasional notes about upcoming happenings, new books, speeches and appearances, contests, and anything else that’s newsworthy in Daily, Texas or in the real world.

I love sharing my cyber-porches with friends who also know the joy of living within a story, then sending it out into the world. To see all 15 books and purchase books go to http://www.lisawingate.com/order.htm. 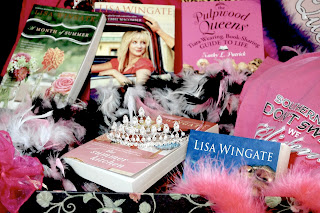 Right now, I’m also running a really fun Ultimate Girlfriend Getaway contest, in which a lucky reader will win a getaway weekend for two in the lovely, historic riverboat town of Jefferson, Texas. The best thing about this getaway is that it happens during the wildest, most exciting book event of the year, the Pulpwood Queens Girlfriend Weekend, AND the getaway package includes two passes to Girlfriend weekend.

This year Pat Conroy, Fannie Flagg and Rick Bragg will be the keynote speakers, and they’ll be sharing space with over fifty other authors, including, of course, Lisa Wingate!

I’m thrilled to 2011 Girlfriend Weekend author and a selection for the massive Pulpwood Queens network of book clubs, which now includes over 350 chapters from all over the world. To find out about the contest, or to enter, go to http://www.lisawingate.com/!
Happy reading and writing, everyone!

~*~
SERIOUS QUESTION OF THE DAY: What crazy thing caused you to break out of a rut?

NON-SERIOUS QUESTION OF THE DAY: If you were trapped in a house for an extended period (let's say, three days) without electricity, what three people would you want trapped with you? Besides good-tasting non-perishable foods, what three items would be on your "must have" list? Leave a comment with an e-mail addy (your name at e-addy dot com)  for a chance to win a copy of NEVER SAY NEVER.
~*~

Lisa Wingate is a magazine columnist, inspirational speaker, and the author of fourteen mainstream fiction novels, including the national bestseller, Tending Roses, currently in its thirteenth reprint. Her books have been featured selections for Doubleday and Literary Guild book clubs, selected for The Reader's Club of America, have garnered LORIES Best Fiction and Reader's Choice Awards, and been nominated for the ACFW Book of the Year Award. Recently, the group Americans for More Civility, a kindness watchdog organization, selected Lisa along with Bill Ford, Camille Cosby, and six others, as recipients of the National Civies Award, which celebrates public figures who work to promote greater kindness and civility in American life. Her most recent books include The Summer Kitchen (Penguin) and Never Say Never (Bethany House).

Kai Miller floats through life like driftwood tossed by waves. She's never put down roots in any one place--and she doesn't plan to. But when a chaotic hurricane evacuation lands her in Daily, Texas, she begins to think twice about her wayfaring existence. And when she meets hometown-boy Kemp Eldridge, she can almost picture settling down in Daily--until she discovers he may be promised to someone else. Daily has always been a place of refuge for those the wind blows in, but for Kai, it looks like it will be just another place to leave behind. Then again, Daily always has a few surprises in store--especially when Aunt Donetta has cooked up a scheme.
Posted by Unknown at October 11, 2010