by Anita Mae Draper
My post last Tues was an introduction to Repeat Photography and its use in historical research.

This post helps you create your own repeat or Now and Then photography. It will also introduce you to blended repeat photography and how to create it. And finally, it’ll show how this can work for those interested in biblical history. 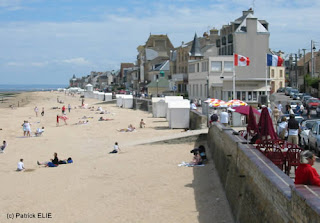 Colorado State University uses a scientific method of repeat photography where you place a distinctive sign in the foreground of each photo for identification purposes. Although I’m not apt to use that approach, I found the rest of this article very helpful especially as it pertains to temporary vs permanent landmarks.

As I said last Tues, this type of photography enhances a trip down memory lane in the photo department. A carefully printed or handwritten notation on the original photo describing the date and event is most helpful. This is the method used by many early photographers.

When you set up for the Now photo, just try to do everything as close to the original photo as you can, from the background, to the arm placements. Even the same expression and turn of the head will give your photo that extra touch and make take a second look.

John Walker has done that with this photo set of Lignières, Switzerland. He found an old post card, found the actual location, and by blending the two in photoshop, was able to come up with an almost exact repeat photograph almost 100 yrs apart.


﻿
﻿﻿
﻿ ﻿Ghosts of the Past
Russian photographer Sergey Larenkov takes this one step further. Called re-photography, he actually blends the old and new photos together into eerie images others have called Ghosts of the Past.
The following 3 photos are from Sergey's World War II set and in particular, the era called the Siege of Leningrad. 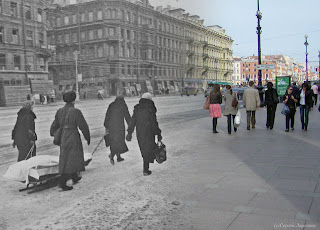 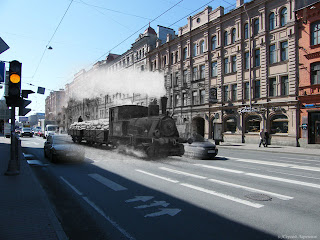 Sergey has found a way to blend a horrific period in history with modern technology in a thought provoking way so it will live on as a reminder, and hopefully a deterrent, to everyone.
Biblical Repeat Photography
So how can a technology which didn't exist in biblical times be used to teach us biblical history? Let's say we want to learn about the crucifixtion. What does the Bible say about it? (All scripture using NIV.)
There actually is a hill called Golgatha near the Damascus Gate on the outskirts of Jerusalem. And it has a road close by where people pass and are well within shouting range. Here's a present day photo of it:

Can you see it? How about if I take you in closer...
Through these photos of Golgatha, we see that development really didn't go forward until the 20th century. One website even said it wasn't until the latter half of the 19th century before scholars seriously considered this hill as the one pertaining to Calvary and began their archeaological digging at the base which is where they discovered the garden tomb. If that's the case, then it would have been relatively untouched in the preceding years.
Archaeological digs are happening all over the Middle East. Many books, such as Views That Have Vanished: The Photographs of David Bivin show before and after photos of these digs.
Jerusalem, for example, is a multi-layer city. So much so, that you can't even dig for a new basement unless you call up the antiquities board and have someone come over and ensure there isn't something of import buried beneath your property. 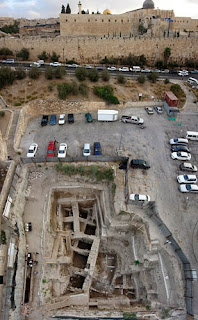 This photo shows excavation in the foreground and the south wall of the old city of Jerusalem at the top.
Because much of the ancient biblical land is buried, this type of photography is more like Reverse Repeat Photography. We want to look at the photo of a mound and then look at another photo after all the excess dirt has been hauled away and we want to see the difference. It's like opening a package to find a wonderous gift inside.
To show you what I mean, look at this excavation of the city of Jericho: 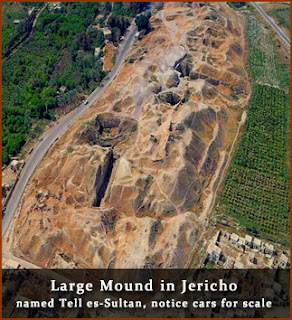 ﻿ Now look at what it was when they first discovered it:

﻿ Bible Places Then and Now is a book which superimposes a flippable, transparent overlay of a reconstructed archaeological site over a present-day photograph. Although this book is out-of-print, used or similar books can be found in libraries and used book stores.

Actually, there are many books which use plastic overlays over maps to show you where the biblical world used to be and how it fit into the Old and New Testament geography. Christianbook.com has a great selection of this type of bible map.

Hopefully, I haven't overloaded you with photos and information. As you can probably tell, I find this whole subject fascinating.

What do you think of Sergey's blended photographs?

Do you have any books at home with plastic overlays? What subject? I think we have a medical one tucked away somewhere.