by Niki Turner
I'm one of those odd people who eat the same thing for breakfast nearly every day: peanut butter on toast with honey (sometimes jelly) and a cup of coffee. Occasionally, I'll venture into yogurt with granola, or an egg white omelet, but most days it's just good old toast and coffee during my quiet time with the Lord.

While I chew my toast and meditate on the Word, I'm aware of the presence of others. Not my children, who would never be caught awake at 5:30 a.m. unless they simply hadn't been to bed yet. Not  my husband, who has his own weird little morning routine involving frosted mini-wheats and headphones that scream "do-not-disturb" to anyone paying attention.

No, these furry others gather faithfully around my chair in a polite semi-circle. With five pink tongues lolling from toothy grins, big brown eyes gazing up with trust and confidence; they wait patiently for a nibble of crust. A crumb for each dog. Sometimes two.

Only one of these dogs is actually mine, Archie the Westie. The other four belong to my kids and son-in-law. Archie is the only one I'm responsible for officially. He's the only one I'm obliged to share my toast with (I know, that statement is worthy of a psychological examination), but I can't give Archie a crumb and ignore the rest of the pack. Every dog gets a tidbit of toast.

What, you ask, does this have to do with Putting an Ink on Scripture?


A woman from Canaan who was living there came to him, pleading, "Have mercy on me, O Lord, King David's Son! For my daughter has a demon within her, and it torments her constantly."
But Jesus gave her no reply—not even a word. Then his disciples urged him to send her away. "Tell her to get going," they said, "for she is bothering us with all her begging."
Then he said to the woman, "I was sent to help the Jews—the lost sheep of Israel—not the Gentiles."
But she came and worshiped him and pled again, "Sir, help me!"
"It doesn't seem right to take bread from the children and throw it to the dogs," he said.
"Yes, it is!" she replied, "for even the puppies beneath the table are permitted to eat the crumbs that fall."
"Woman," Jesus told her, "your faith is large, and your request is granted." And her daughter was healed right then.

To be called a "dog" in Israel was not a compliment. We might compare it to calling someone a "pig" today. Or a cockroach. Or a plasmodial slime mold. You get the idea. But instead of getting offended, she saw beyond her position to the mercy of God. 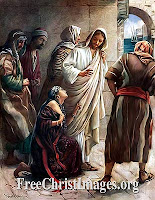 This Canaanite woman was not a Jew. She had no covenant with God, no right to ask anything of Him. She couldn't call on God's faithfulness to Israel, nor on the promises given to believers in the Word. She had no righteousness based on faith, no holiness bought by the shedding of blood, nothing to offer in exchange for answered prayer. (How often do we go before the Father with a prayer request and offer up  our good works, or a vow, or some other form of spiritual collateral in exchange for His answer?)

Instead of basing her request on herself, her position, her works, her lineage, or anything else, she based her petition solely on the mercy and compassion of God.

Every morning God uses my pack of pups to remind me of His compassion and mercy and love, not just for those who "belong" to Him, but for all the world. For me. I won't turn away from dogs, how could I ever think God would turn away from me because I'm not "good enough" or "worthy" of His attention and provision. Bread is a metaphor in the Bible for many things we need: life, healing, provision, sustenance, confirmation of covenant promises, and more.

God's love is greater than we can imagine, bigger than we can conceive, broader than anything our narrow minds can define. And He considers it a display of great faith when we recognize His unfailing love and endless supply of mercy and come to Him with our requests, large or small.

Feed a dog. Feed your faith.