The Preacher's Bride by Jody Hedlund

by Gina Welborn
(Notice: For FTC purposes, this book was sent to me by the publisher.)
She was determined to serve a wounded family.
He was determined to preach the truth.
Neither expected to fall in love.
A couple weeks ago I pulled the saffron-padded, from-Bethany-House envelope out of my mailbox and thought, "Ooooh, Karen Witemeyer's book 2!" Well, maybe I didn't think the exclamation point. Still, I giddly opened the package because I was excited to read Karen's book.

Only it wasn't her book.

I'd totally forgotten I offered to endorse A PREACHER'S BRIDE. Here's probably the moment to confess that I made the offer to Jody without even knowing what her book was about. I liked Jody so I concluded I'd like her book. Here's also probably the moment to confess that while I thought "lovely cover," I had a jolt. Amish?! Granted, I enjoyed Vannetta Chapman's A SIMPLE AMISH CHRISTMAS and was happy to endorse it, but I feared...well, *sigh.* I'll happily read another of Vannetta's Amish books but don't count me Amish-loving-converted yet.

Fortunately for me (and Jody), I turned the book over. 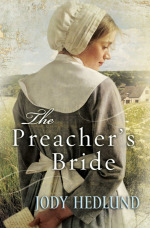 In 1650s England, a young Puritan maiden is on a mission to save the baby of her newly widowed preacher—whether her assistance is wanted or not. Always ready to help those in need, Elizabeth ignores John’s protests of her aid. She’s even willing to risk her lone marriage prospect to help the little family. Yet Elizabeth’s new role as housekeeper takes a dangerous turn when John’s boldness from the pulpit makes him a target of political and religious leaders. As the preacher’s enemies become desperate to silence him, they draw Elizabeth into a deadly web of deception. Finding herself in more danger than she ever bargained for, she’s more determined than ever to save the child—and man—she’s come to love.

Okay, so since I'm on a roll with the moments of confession, once I had that epiphany of what genre the book really was, I went "duh. Jody's in His Writers, the writing group of gals with a passion to read and write European-set historicals."

I'm blaming my duh-ness on having five children. And since Jody has five children too, I know she'll totally empathize. I know many will say "There's a big difference between Amish attire and Puritan attire." I, sadly, am not one of those clothing experts. Now enough about my lack of expertise.

In fact, I wish I had bought the novel myself instead of getting an endorser copy.

While I've read more than a handful or two romances this year--and basically enjoyed most of them, especially Julie Lessman's A HOPE UNDAUNTED, Laurie Alice Eakes's WHEN THE SNOW FLIES, Mary Coneally's MONTANA ROSE, Melanie Dickerson's THE HEALER'S APPRENTICE, Vannetta Chapman's A SIMPLE AMISH CHRISTMAS, and...uggh, I know I'm forgetting several goodies (sorry to those I drew a blank on)....anyhoo
Posted by Unknown at October 30, 2010