by Anita Mae Draper
I bet all sorts of images are crawling through your mind after reading the title, eh? Put your hand up if you know what I'm talking about. Or at least take a wild guess.﻿
﻿ 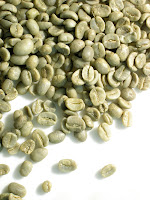 Here's a hint...
Yes, we're talking about coffee. And not just any old coffee, but frontier, wagon train, and cowboy coffee circa the latter half of the 19th century.
Back then, making coffee was a big deal. If a cowboy was riding the range and too far from the ranch or a line shack, he'd spend the night under the stars. So once he decided where he'd bed down, he needed to find some fuel for a fire. This meant wood, branches or buffalo chips depending on the landscape. Using a flint or matches, he'd get a nice fire going. While waiting for the fire to burn down, he had time to fill his coffee pot with water. That is, if he had any water left in his canteen or had chosen a site near a water source. When the fire was down to embers, he'd set his coffee pot to boil. 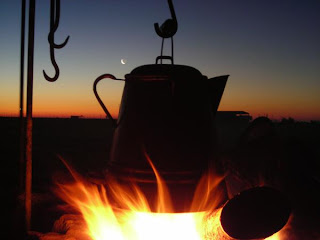 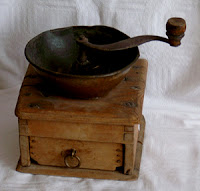 At this stage if it was prior to 1865, the cowboy had to roast the green coffee beans and grind them before adding them to his boiling water.
The standard recipe for cowboy coffee was one handful of ground coffee per cup of water. The cowboys liked it good and strong. How strong? Strong enough to pass the six-shooter test. Cowboy lore says if you dropped a horseshoe or six-shooter in your coffee and it sank, the coffee wasn't strong enough yet.
And according to a number of sources including Western Words by Ramon Adams, weak coffee amounted to a cup of belly-wash.
For years, coffee sellers had been trying to process and sell roasted coffee but it just wouldn't keep.

Then in 1865, the Arbuckle Brothers out of Pittsburgh, Pennsylvania invented a method of preserving the flavour by coating each roasted bean with an egg white and sugar mixture. Arbuckles packaged their Ariosa (air-ee-o-sa) roasted coffee in 1 lb airtight paper packages with 100 in a case.
Apparently, the Arbuckle package with the distinctive yellow label and Flying Angel trademark was so successful, many cowboys thought it was the only roasted coffee on the market. Of course, what made it so successful was that anyone could walk into the closest general store or mercantile and walk out with a convenient package of roasted coffee. 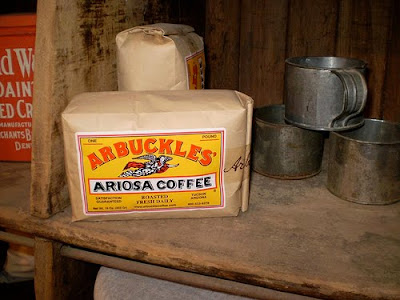 Other coffee companies followed, but Arbuckles maintained their market share by including a coupon on the bottom of the package which could he traded in for all sorts of catalogue items. The package also included a peppermint stick and a collectible advertising trade card which could depict a scene from any one of the 50 states or numerous countries around the world as well as flora and fauna. These perks helped Arbuckles own the slogan...

Getting back to my cowboy coffee, you may be wondering about all those grounds floating in the old coffee pot. Well, you had a choice. One, you could throw a dash of cold water on, which surprised the little grounds so much they sank to the bottom. Or, you could do like this fella...

That explains where all those missing socks go. LOL

And in case you're wondering, here's the current recipe for a decent cup of Arbuckles coffee...

It’s basically three steps:
• Boil your water and remove from the fire.
• Add 2 to 3 tablespoons of perk-ground coffee per cup of water.
• Let it steep for 4 to 5 minutes before drinking.
The grounds usually settle by then. If they don’t add a splash of cold water, which sinks and carries most of the grounds to the bottom of the pot. A few grounds remain in the bottom of each cup. But, that's the nature of any unfiltered coffee.
Keep the pot close to the edge of the fire to keep it warm enough to drink. Don't put directly over the fire to cause scorching.
So; brew up a pot, pardner' and enjoy the sunrise.


And no, I'm not getting a kickback for promoting Arbuckle coffee here, but I found this other nice video on their site and since Western is my favourite type of music (after gospel), I thought I'd invite you to grab your own cup of coffee, sit back, and soak up the cowboy atmosphere for a couple minutes.

This post came about because of my western research for one of my manuscripts. And while writing it, I realized how blessed I truly am to be able to open a cupboard and have a fresh cup of coffee in under 2 minutes.

Question for the day: What kind of coffee do you favour: belly-wash or six-shooter?