And you thought your floor was dirty

by Niki Turner
We've put a man on the moon. We've created vaccinations to combat some of the most vile diseases. We can communicate with each other at least as well as the Jetsons and Star Trek (although I'm still waiting for Rosie the robot maid and that transporter thingy).

This was the thought that occurred to me as I swished my mop across my kitchen floor Saturday afternoon. In spite of the advances in technology -- from automated homes to cars that park themselves -- if I want my kitchen floor to be clean, I still have to mop it.

It could be worse, though. As a preteen, I distinctly recall pulling the following book off a shelf at my local library (based entirely on the cover, which for all of us who write, should stand as a reminder...) It
was a wonderful story. A kind of Oliver Twist tale with a charming (and obviously memorable) female lead.

What's funny is that one of the primary recollections I have of this story is the author's description of the floors in the London manor house where the heroine was lodged. Why? Because I didn't know what "rushes" were, exactly.

Back in those pre-Internet days, if you had a question about something, you didn't just "Google it" to find the answer. Sometimes, the answer required deeper digging than even your local library or your parents' outdated set of encyclopedias had to offer.

As a result, I never did find out what those "rushes" were. Until now.

Our esteemed Inky leader recently asked us to share a list of our favorite books. For lovers of books, that's a HARD question. When you can consume a book in four hours or less, you tend to forget little details like title and author, sad to say. I closed my eyes and tried to think of books that have stuck with me over the years. Linnet was among them, and immediately, the "rushes" question returned. Armed with Internet access, I Googled it. (Stop laughing ... you've done the same.) 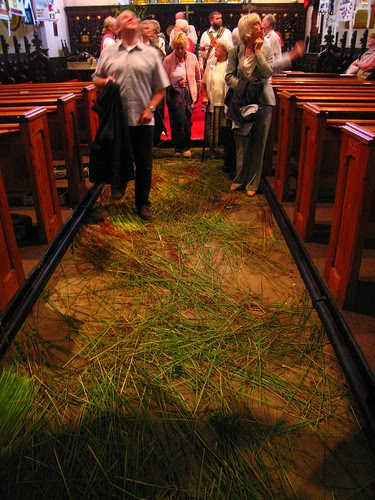 The result? I stumbled into a debate. *sigh* At some point in my life I would like to set out to research something that ISN'T up for debate.

The traditional theory is that fresh cut greens or straw, usually with herbs added, were scattered loosely across the floors of medieval homes as a sort of carpet. In Linnet, the household where the heroine found herself was the modern equivalent of a crack house. As such, the rushes were soiled with leftover food and animal excrement and who-knows-what. Rodents used the dirty rushes as cover when they scavenged for food. Frequent replacement of the rushes was considered a sign of prosperity and proper housekeeping. 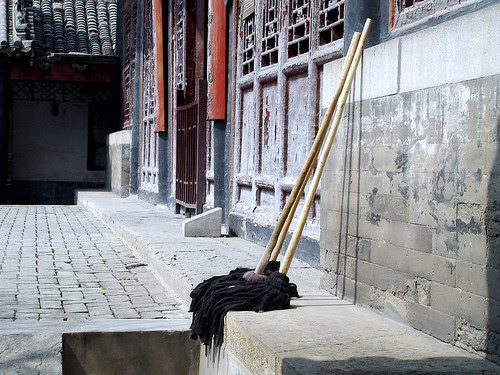 The debate centers around whether rushes were loosely scattered, like straw in a stable, or woven into nicely civilized mats that wouldn't catch on the floor-length skirts worn by women at the time.
Debate or not ... I come back to the same problem. In thousands of years of human civilization, whether we're talking about putting in a fresh layer of elephant dung and letting it dry to create a nice hard floor, or my ridiculously stained synthetic fiber carpet, or changing out the rushes and mixing in some nice smelling herbs, the process of keeping the floor clean has not kept up with technology. We're still relegated to the broom, the mop, and (in the last century) the vacuum.
Mop photo by rudenoon via PhotoRee
What unresolved questions plague you in your historical reading and/or research?
Posted by Niki Turner at February 22, 2011