He has one collection that I actually enjoy though. Maps. There’s something about antique maps that draws me in. I like to read the names of towns and trace the sinuous path of rivers and roads, and well… imagine.

The oldest known maps are clay tablets from Babylon, believed to have been created around 2300 B.C. Some historians even claim that there are cave drawings that are maps from much earlier. Greek and Roman map makers were well aware that the world was a sphere and their maps reflected their knowledge. During the Middle Ages European maps too a distinctly odd turn, literally. T-O maps began to be created which showed an exaggeratedly large Jerusalem as the center and east was oriented toward the top of the map. 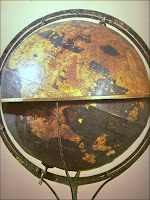 During the Age of Exploration, map making made great strides forward. It was during this time that compass lines began to be added to maps and globes were created.

Maps and globes were incredibly valuable. The country that controlled the knowledge of the trade routes had a decisive advantage. And that advantage extended from bringing home incredible wealth to the nation in control of the maps to military and diplomatic power. Because of this navigational charts and maps were soon given the status of state secrets. And by extension, cartographers became secret service agents, able to lead their countries to new lands to colonize.

For example, the Treaty of Tordesillas between Spain and Portugal divided the world in half. And the two countries agreed to claim new discoveries only in their half. Spain took the western hemisphere and Portugal the eastern.

But there’s some evidence that Portugal’s King John II may have put one over on good old Ferdinand and Isabella. See the originally proposed line was a little further west of the one that was finally agreed upon.

Pedro Alvarez Cabral is officially credited with discovering Brazil in 1500, ostensibly during another attempt to reach India via a westerly route. He promptly claimed the newly discovered land for Portugal since that bump out of the South American continent lay well within the negotiated territory. It’s believed by some historians that Portuguese ships discovered the coast of Brazil

much earlier however, and that John II knowingly had the line moved in order to gain more land.

The discovery of Australia is attributed to Captain Cook, but there’s some evidence that the Portuguese knew of the continent and kept the information a secret.

With so much at stake it’s no wonder that spies were soon dispatched to one another’s capitals to try to buy or steal those incredibly valuable maps. Lisbon in particular was inundated by secret agents.

Anybody else’s head spinning with story possibilities? What, no one else is envision a map sewn into a heroine’s skirt, midnight escapes and swashbuckling adventure on land and sea? Oh. Well I’ll go into my corner now and content myself with daydreaming.

Now maps are much more prosaic. Just tools to get us from point a to point b. There’s no romance or intrigue in a GPS system. But when I look at my husband’s collection of (fake) antique maps I can still smell a whiff of the spice islands and all the adventure of the Age of Discovery.

Is anyone in your life a collector? Is it you? What do you/they collect?