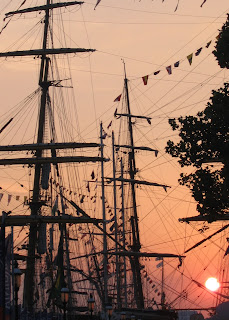 -- Matthew 28:20
This past summer, I commissioned my first author website. At the time, I expected to showcase an unpublished writer working towards that first contract, so I focused on my two best books. Though both historical, they were quite different in many respects: one set in 19th century London and the other in the wilds of 17th century Virginia. My designer requested ideas for pictures, but what did two such disparate books have in common besides the author? I could hardly tie them together with pictures of bucolic landscapes or city skylines. And then it came to me--ships.

Even now as I work on my next book, my main character is a retired naval officer. It makes sense, really, that I should have so many ships in my manuscripts--and not just because I live near the world's largest naval base. Or that my husband works for the Navy. Or that my best friend is a Navy veteran.

Before locomotives or cars or plans, people traveled by water. To this day, most of our major cities are located on rivers or bays. I write stories of people who have far to go, both literally and figuratively, so ships figure prominently in both those books. One begins on a ship. The other ends on a ship. One heroine lost her brother on a frigate during the Napoleonic Wars. The other one experienced shipwreck. In fact, I even included a mention of the Bible story about Jesus and his disciples on the Sea of Galilee. Remember that from Sunday School? An exhausted Jesus went to sleep on the boat. Then a sudden storm blew up. Thinking their lives were over, the frightened disciples woke the Master--who rebuked them for their unbelief before calming the storm.

As the All-Knowing God, Jesus sees the future as clearly as the past. There are no surprises in His world. He knew a storm was coming. He could have stopped the disciples from getting into the boat--but He didn't. He did, however, get into the boat with them.

This month marks the 68th anniversary of the sinkng of the USAT Dorchester in WWII. American Legion posts and churches marked the event with observances around the country this past Sunday. The Dorchester was transporting men and supplies through the stormy waters of the North Atlantic when a German torpedo hit her below her waterline. So severe was the damage, she sank in a mere eighteen minutes.

Eighteen minutes. Not even the length of one period of a hockey game. And yet, something so amazing happened during those eighteen minutes, we still commemorate them seven decades later. You see, along with her other cargo, the Dorchester carried four chaplains: Rabbi Alexander Goode, Father John Washington, Reverend Clark Poling, and Reverend George Fox.

In the chaos that ensued as the ship began to sink, these four men went to work--calming the frightened and praying with the dying. They passed out life vests. And when the life vests ran out, all four of them took off theirs and gave them away so that others might live. Survivors reported that as the ship sank into the sea, the four chaplains stood together on the deck, hands linked in prayer.

God doesn't promise a life of calm seas and fair winds. There will be storms and attacks: illnesses, a child in trouble, financial distress. But He'll be in the boat with us, no matter what lies ahead.
Can you remember any particularly special times when you felt God's presence despite the storm raging around you?
Posted by C.J. Chase at February 10, 2011