Book Recommendation-Lady in the Mist

Siiigh. There’s something so satisfying about reading a good book. It’s like comfort food without the calories. 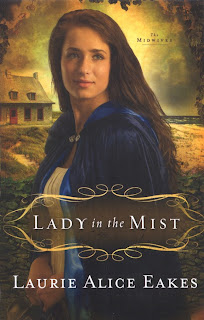 Laurie Alice Eakes's Lady in the Mist is just such a story. As the local midwife, Tabitha Eckles has unprecedented freedom for an unmarried young woman in 1809 Virginia. But with the privilege comes a host of responsibilities, including keeping other peoples’ secrets. Secrets she’d rather not know.

On the way home from a lying-in she meets handsome Englishman, Dominick Cherrett, on the beach. A beach from which American men have been disappearing, snatched from their homeland to serve the British navy.

Dominick knows about secrets too, he’s got enough to sink a British frigate. Ostensibly an indentured servant, the last thing he needs is more complications. But meeting Tabitha is just the first of many.

As the pressure mounts for both of them so does the number of missing men.

Laurie Alice does a great job of developing both the romance and the spiritual battles that her hero and heroine face. Her descriptions are crisp and her research is flawless.

I highly recommend this story to lovers of historical romance. You can find it at Barnes and Noble, Amazon or ChristianBook.com.

You can read an excerpt here.
Posted by Lisa Karon Richardson at March 12, 2011