by Gina Welborn
A couple weeks ago a college-aged friend of the family asked if she could come over and watch a couple movies: Seabiscuit and Remember the Titans. Since we owned both movies, we decided to make it family double-feature night. Son Jadan (11) wasn't interested in watching "not another stupid horse movie." The best punishment in the world for him is to make him watch Flicka. (Note to self: Remember that next time he "forgets" to do his book report.)

Anyhoo, the reason our friend had to watch these movies (and a couple others) was because she was learning in class about the Liberty Valance Effect, coined by comedian and actor Robert Wuhl in his HBO series, Assume the Position.

"When the truth becomes legend, print the legend." ~Who Shot Liberty Valance?

Now while I believe Mr. Wuhl made some valid points about how we've allowed historical facts to be embellished, I also realize that he views history through very liberal-colored glasses. (There is a reason Israel Bissel isn't a house-hold name.) However, the point Wuhl was making was that the public generally doesn't care if something really happened that way as long as the re-telling is engaging.

In the past, I think it was easier for movie makers to get away with historical inaccuracies. But with the internet at easy disposal, it's far harder for them to get away with perpetuating the Pocahontas Myth  (more info here).

This past Saturday night, the kids and I watched Secretariat. Oh, it was an enjoyable family film -- for all of us, minus Jadan and his anti-equine sentiment -- but when I got to reading about the inaccuracies, I was more apathetic than bothered. (Read here and here for info on inaccuracies.) Yes, they could have written a better and more truthful script. When the Secretariat wasn't in the scene, I was bored. What actually bothered me the most about the movie was the feminist and anti-war propaganda subtly snuck in.

Well, the reading of about the Secretariat's historical inaccuracies lead me to reading about the ones in Seabiscuit.  One man wrote a review titled "Seabiscuit: Hollywood Filmed the Legand, Not the Fact!" Of course, that lead me to one called "Historical Liberties Aside, Seabiscuit is an Excellent-Piece of Movie Making." Even though I had read Laura Hillenbrand's book and did a bunch of googling after watching the movie, I didn't care so much about the liberties taken because I enjoyed the quality of the movie-making. That slow first 45 minutes where the main three characters are developed is my favorite part of the movie. I cry every time Howard cradles his dead son's body. Of course, I also was annoyed by some of the liberal glorification of Savior Federal Government, and had to ignore that narrative aspect.

While I enjoyed the movie-making aspect of The New World (Colin Farrell is John Smith, Christian Bale is John Rolfe), I was utterly annoyed by the inaccuracies. When I watched Kingdom of Heaven (Orlando Bloom), I reached "annoyed" by the 15-minute mark because even though I'm not a middle ages expert, I knew enough to be annoyed. I googled the historical facts as soon as it was over. To this day, I will not watch the movie again.

Funny thing is A Knight's Tale (Heath Ledger) is a movie I will watch again and again. Why? Because the directer knew he was taking liberties. He did it intentionally.

"[Director] Helgeland also jokes in the commentary that he chose 1970s music and hairstyles for the movie because 'the seventies are always the same,' regardless of century. More seriously, Helgeland justifies his use of music by speculating that even during the 1370s, persons in the main characters' age group would've enjoyed newer, more contemporary music than something that had been around since their great grandparents were young, and opted to use music that would affect the audience the same way late 14th century music would've affected the youth of the 1370s. Thus, Helgeland attempted to stylize the movie in such a way as to bring the Middle Ages to the audience, rather than force the audience into the Middle Ages." ~Wikipedia, A Knight's Tale.

"Bring the Middle Ages to the audience."  I like that because when I'm reading a historical romance, that's what I want the author to do. Bring the time period to me. Don't force me into it. I can read a non-fiction history book if I want that.

QUESTIONS OF THE DAY: How do you feel about historical inaccuracies in movies? Do you tolerate them as long as the movie is enjoyable? Does your enjoyment waver when you know women didn't wear hoop skirts in the later 1800s?

What movie's inaccuracies were so blatant that you refuse to watch the movie again?

What movie's inaccuracies don't matter to you because you loved the movie despite them? 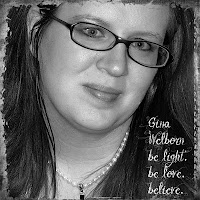 Gina Welborn worked in news radio scripting copy until she took up writing romances. She is a 2009 ACFW GENESIS historical romance finalist and a 2007 RWA GOLDEN HEART® inspirational finalist. As a member of RWA and ACFW, she’s an active contest judge and coordinator. Her inspirational historical manuscripts have also finaled in the Daphne du Maurier, Duel on the Delta, Dixie, and Maggie contests. This Oklahoma-raised girl now lives in Richmond, Virginia with her youth-pastor husband, their five Okie-Hokie children, and a Sharpador Retriever who doesn’t retrieve much of anything. Her first novella, “Sugarplum Hearts,” part of the HIGHLAND CROSSINGS anthology, will be released by Barbour in January 2012.
Posted by Unknown at March 29, 2011