Apples to Apples: the Jabberwocky Edition

by Gina Welborn
Last Christmas we got an expansion pack for our Apples to Apples game. Only things is our version was the junior one. Consequently, I was . . . oh, how do I say this . . . shocked, stunned, embarrassed by some of the words in the expansion pack. Yes, I censored.

After all my 11-yr-old son thinks "sexy" is a four-letter word.

One other thing about the expansion pack is the number of word combinations, ranging from things like "black and blue" to "Abbott and Costello" to "candy-apple red."

The amazing (and frustrating) thing about English is it's an ever-changing critter. I'm not the only one who's reached this conclusion.

"The English language, as the largest and most dynamic collection of words and phrases ever assembled, continues to expand, absorbing hundreds of words annually into its official and unofficial rolls, but not without a simultaneous yet imperceptible sacrifice of terms along the way." ~Jeffery Kacirk, THE WORD MUSEUM

My 13-yr-old daughter randomly told me about a line in one of the Narnia books where Lucy is described as "But as for Lucy, she was always gay and golden-haired . . . " Then she asked me when (and why did) the word change from meaning "happy" to "homosexual." Ummmm. Well, I don't know. I almost said "google it," the then thought better of it.

How many times have we heard abracadabra used around Halloween? Yet have you ever thought of saying "Did you see Jennifer Lopez's dress? It looked abracadabrant on her!"


My son was going lick-for-leather today as he drove his moped to school this morning. Fortunately, he still wasn't breaking the speed limit.

Here's a picture of quadrigamist Earnest Hemingway. Take a guess of the meaning.

guddle :: to catch a trout by groping with the hands under stones or banks of a stream


SERIOUS QUESTION OF THE DAY :: What word would you like to see added back into everyday usage? What word are you highly looking forward for it to work its way out?

NON-SERIOUS QUESTION OF THE DAY :: Who works the ziff better? 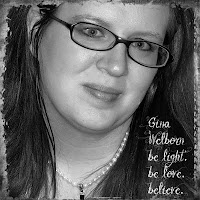 GINA WELBORN worked in news radio scripting copy until she took up writing romances. She is a 2009 ACFW GENESIS historical romance finalist and a 2007 RWA GOLDEN HEART® inspirational finalist. As a member of RWA and ACFW, she’s an active contest judge and coordinator. This Oklahoma-raised girl now lives in Richmond, Virginia with her youth-pastor husband, their five Okie-Hokie children, and a Sharpador Retriever who doesn’t retrieve much of anything. Her first novella, “Sugarplum Hearts,” part of the HIGHLAND CROSSINGS anthology, will be released by Barbour in February 2012.