Catch It While You Can!

When I was in college and didn't have the slightest idea that I would ever be a writer, I was required to go to a Shakespeare play. Having been assured all my life that Shakespeare was boring, I reluctantly went to an outdoor performance of "As You Like It." 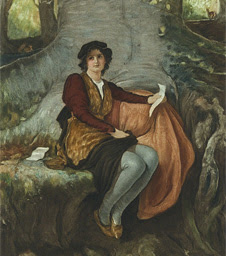 I was never the same again.

Where had this Shakespeare guy been all my life? Was I blown away because the performance was fun and sweet and well acted? Because the hero, Orlando, was SO cute? (Hey, I was still in my teens!) Or was something else going on?

I have always loved stories, but I was suddenly handed this whole new (to me) package of language and emotion and pageantry. I devoured the comedies as quickly as I could, borrowing videos of them from the library when they were available. After the comedies came the tragedies. Yes, I knew about some of them, but I had never really leapt into them willingly. But soon even those were gone and all that was left was the histories. But, ah, I knew history was boring. Everybody knows that. 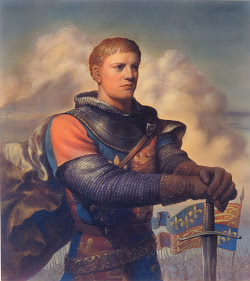 d out a video of "Henry IV, Part One," and immediately fell in love. Family conflict with far-reaching political consequences. I was in heaven. But soon, once the histories had been expended, I decided I wanted to know the truth behind the dramas. Obviously you can't depict the entirety of a king's reign even in a three or four hour play. What events had been left out? Were the characters depicted actually as they were in real life? Which people and events had been changed so the play would fit the dramatic mold?

At the time, I didn't know why medieval English history suddenly consumed me. It had never even slightly interested me before. But soon, mostly to amuse myself during lectures in accounting classes, I started writing a medieval scene. In the aftermath of a battle, a young man wakes up, deeply wounded physically and emotionally, refusing to acknowledge either hurt. Why?

And that was the beginning. After years of playing with the story, never expecting the growing number of scenes to ever become anything anyone but I would see, that little seedling of a scene grew into In Honor Bound, the first book of my medieval trilogy.

Recently, I have been more and more consumed with a different genre, one I've never written, one I rarely read. But this story simply will not leave me alone. I've stayed up till four or five or six in the morning for nearly two weeks now, reading related stories, looking a pictures and videos that depict what I have in my head at least to some degree. I've neglected my housekeeping and my personal blog, my sewing and the Netflix disc that I've had for eight or ten days, I've hardly eaten (a good thing), and all the time I've wondered what was going on in my head. Why in the world am I being so crazy? But this morning, between sleeping and waking, I envisioned a scene that I knew was for this story.

Did I, in writing it down, really capture what I imagined? Will it become a book one day? I can't say that I see it now. I honestly don't know how to write something like this. Others have done it already, and done it much better than I can see me doing it.

But I must follow the story where it takes me. If I'm being prepared to write something I'm called to write, I don't want to miss that calling. I want to see and write that vision. I'll need direction and inspiration and help, I know that much. But whatever comes of what comes to me, I'm determined to capture it before it can skip away and lose itself in the myriad day-to-day tasks that fight it for my attention.

Maybe it's just an obsession. If it is, I hope it's a magnificent one.

Either way, I'm going to catch it while I can.

Do you ever lose an idea because you didn't stop to write it down? Have you had ideas that wouldn't leave you alone no matter how much you needed to do other things?

DeAnna Julie Dodson has always been an avid reader and a lover of storytelling, whether on the page, the screen or the stage. This, along with her keen interest in history and her Christian faith, shows in her tales of love, forgiveness and triumph over adversity. She is the author of In Honor Bound, By Love Redeemed and To Grace Surrendered, a trilogy of medieval romances, and Letters in the Attic, a contemporary mystery. A fifth-generation Texan, she makes her home north of Dallas with four spoiled cats.
Posted by DeAnna Julie Dodson at September 21, 2011