The conference started on Thurs with the first workshops including the Early Bird session, Worship, the Publisher's Spotlight Sessions and the Agents Panels. ﻿﻿

Friday's breakfast started at 8 am with the last session ending at 9:30 pm. This was the first day of the agent and editor's panels as well as more workshops where the Inkies spread out to cover differ different sessions.

The keynote speaker was Tracie Peterson of Bethany House who addressed the assembly Friday afternoon.

Friday night was also the My Book Therapy Pizza Party hosted by Writing Therapists Susan May Warren and Rachel Hauck. The venue was the no-roof terrace and adjoining room at the top of the Hyatt Regency Hotel. It provided a spectacular view of the Gateway Arch and the Mississippi River.

Susie May and Rachel provided food, hilarious entertainment by participants including Karen Ball, Jim Rubart and others, and handed out the Frasier writing award.

I was the ACFW's ezine reporter for the final workshop of the day, Rejection: The Key To Your Success presented by Steve Laube and Tamela Hancock Murray.

Saturday morning breakfast was fun as I sat with the Seekers and friends.
﻿﻿
﻿﻿ ﻿
﻿

﻿﻿
After devotions and worship, the 2nd day of agent and editor appointments carried on as well as more workshops. My morning consisted of the second part of Randy Ingermanson's The Snowflake Method which is based on his popular writing software program.

During the afternoon, I sat in on Susan May Warren's class, Focus on Description. That was followed by Media Training by the people who bring you Romantic Times and the Romantic Review blog. No sooner had these ended when everyone rushed upstairs to ready themsleves for the Gala Banquet and Awards show. 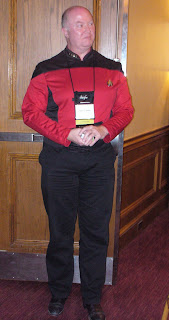 An interesting turn of events was the appearance of several writers and their spouses in costume according to what they wrote. I didn't get many photos, but Randy Ingermanson was in a top hat and tails, Jeff Gerke was some science fiction character, and here's an officer straight out of Star Fleet. I also saw a Mad Max look-a-like, several women in period gowns and a man in a Word War II uniform. It's very exciting to see this change of events. Two years ago in Denver, the only person wearing what she wrote (that I know of) was Roslyn Elliott.

The Inkies enjoyed the banquet so much, they decided to do a spoof of the old TV show, Charlie's Angels - except now they're known as Charlie's Inkies.

The next day was Sunday and I took some video of the choir singing but I have to get home to make a YouTube video of it.

I also took videos of some of the My Book Therapy shenigans and other things﻿﻿﻿﻿﻿﻿, but you may have to check my site at http://www.anitamaedraper.com/ later on to see those. Watch the blogroll in the sidebar for more info.

I had a fantastic time in St Louis. My best conference experience to date. What about the rest of you Inkies. What did you think?

And for the rest of you, when we go to conferences, do you prefer to see photos of the attendees or the venue hotel and city? 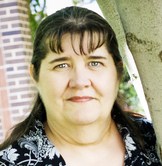