What can I say, we're a stinky, zombie-loving family.

So in honor of Inkwell's birthday celebration, I thought I'd talk about life's two inevitables: Death and Taxes. Actually, not taxes because that's boring . . . and irritating to the libertarian in me.


"The way through the world is more difficult to find
than the way beyond it." ~Wallace Stevens
Pause for a moment and think about everything that's happened in your life in the last year. Here at Inkwell, we've experienced births, deaths, illnesses both healed and unhealed, marriage woes, children woes, job woes, job losses, job gains, new book contracts, rejection letters, contest finals, contest non-finals, bad-hair months, tests, trials, and tribulations.


"The thief comes only to steal and kill and destroy;
I have come that they may have life and have it to the full." ~Jesus of Nazareth (John 10:10)
Every thought, "yep, Jesus gave me new life in Him, but I'm still waiting on the full part"? I know I have. I want abundant. I want full. I want it all . . . and I want it now.

A dear friend came over a couple nights ago to chat. She got to talking about attending a women's minstry event that I also went to last week. As we were singing "Revelation Song," she said that God spoke to her about her current struggle. "Wendy, why are you holding on to these broken dreams? Let them go. You don't need them anymore."

I almost cried because God told me basically the same thing during that song, only in different words.

Why am I holding onto broken dreams? Why are you? Things can't go back to the way they were. Let them go. You don't need them anymore.

Yet, like the Israelites in the desert after leaving Egypt and wishing for life back in slavery because it's so much better than the desert, I cling.

If only __________________ . Fill blank with whatever it is you think you need to live a full and abundant life. Your family back. Your job back. Good health. A new car. A book contract. A husband who loves you with the love of a romance novel hero. Children who actually acted thankful for all they have and for all you do for them. A washing machine that doesn't rattle every time you use it. Nice hair.

Reminds me of FINDING NEMO when Dory and Marlin are in the whale. (Here's a link to the scene if you're interested in watching: http://www.youtube.com/watch?v=XYoUkGRFmR0&playnext=1&list=PL3245E759D1CFE055)

Marlin is frantically trying to escape because he has to find his son. The water in the whale is going down so Marlin thinks it's going to eat them. "How do I taste? Do I taste good? Tell him I'm not interested in being﻿ lunch!" Which doesn't stop the whale from moving the water to the back of his throat. Which only makes Marlin hold on even tighter. Fight even more. Dory cheerfully shares, "He says it's time to let go. Everything's going to be all right."

"How do you know something bad isn't going to happen?"

I'm glad Jesus promised to give me life and to have it to the full, but somedays (can I get an amen here) I'd rather He promised no bad things were going to happen.

What Dory was really saying was, "Marlin, stop holding onto those broken dreams of losing your wife and other children, as well as those fears of losing all you have left: Nemo. Everything's going to be all right."

Somehow the frantic, fear-obsessed clown fish managed to find the courage ONE MORE TIME to face possible death so that he could finally be free to experience abundant life.

Don't we all have to do that?

Listen . . . the back of the whale's throat is filling with water.

Gina: "Hey, girlie, He says it's time to let go of your broken dreams. Everything's going to be all right."

You: "How do you know something bad isn't going to happen?"

How can we say we trust God with all our hearts and then still lean on our own understanding? Let's both let go and see where God is going to take us.


Take a risk. Take a chance. Make a change. Breakaway . . .
Therefore, since we are surrounded by such a great cloud of witnesses, let us throw off everything that hinders and the sin that so easily entangles. And let us run with perseverance the race marked out for us, fixing our eyes on Jesus, the pioneer and perfecter of faith.
~Hebrews 12:1-2a
Happy Birthday, Inktropolis!!!
May this next year bring us whatever is needed to bring God the glory.

SERIOUS QUESTION OF THE DAY :: What broken dreams have you been clinging to and God's been telling you to let them go?

NON-SERIOUS QUESTION OF THE DAY :: What article of clothing do you own that it is well past time you threw it away? Please volunteer the info because you don't want it volunteered for you.
~*~ 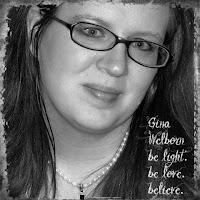 GINA WELBORN worked in news radio scripting copy until she took up writing romances. She is a 2009 ACFW GENESIS historical romance finalist and a 2007 RWA GOLDEN HEART® inspirational finalist. As a member of RWA and ACFW, she’s an active contest judge and coordinator. This Oklahoma-raised girl now lives in Richmond, Virginia with her youth-pastor husband, their five Okie-Hokie children, and a Sharpador Retriever who doesn’t retrieve much of anything. Her first novella, “Sugarplum Hearts,” part of the HIGHLAND CROSSINGS anthology, will be released by Barbour in January 2012.

www.ginawelborn.blogspot.com
Posted by Unknown at September 01, 2011