I love reading young adult fiction. Most of the time, the YA books I enjoy the most appeal not only to the target audience, but to adults as well. Are any other 40-somethings out there looking forward to the movie adaptation of The Hunger Games? I rest my case. So today, I'm very excited to share Replication, the first book in a new young adult series by Jill Williamson. 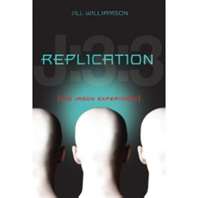 ABOUT THE BOOK
Someone is covering up multiple secrets… Martyr—otherwise known as Jason 3:3—is one of hundreds of clones kept in a remote facility called Jason Farms. Told that he has been created to save humanity, Martyr has just one wish before he is scheduled to “expire” in less than a month. To see the sky.

Abby Goyer may have just moved to Alaska, but she has a feeling something strange is going on at the farm where her father works. But even this smart, confident girl could never have imagined what lies beneath a simple barn. Or what would happen when a mysterious boy shows up at her door, asking about the stars.

As the reality of the Jason Experiment comes to light, Martyr is caught between two futures—the one for which he was produced and the one Abby believes God created him to have. Time is running out, and Martyr must decide if a life with Abby is worth leaving everything he’s ever known.

JEN'S THOUGHTS
I love this book! Even though we know from the start that Jason Farms is populated by clones, you have to ask the question: Clones of who? How this question is answered is one of the great surprises that pop up along the way.

Williamson tackles controversial issues such as cloning and when life begins in a thoughtful, unique way. By contrast to the "normal" teenagers in the book, Martyr at first seems awkward and out of place. But you realize that he's just like them... trying to figure out who he is and his purpose in the world.

The character of Abby is a Christian from the get-go, and her faith is treated as a natural part of who she is. So it's only natural that she would share her faith and her world view with Martyr, who has no knowledge of God. Some may find this overtly Christian, but I thought it worked quite well.
This is a great book for pre-teens and older. Parents, you'll want to read this one, too. It could lead to some very interesting conversations with your kids!

Q for U:  Have you given any thoughts to the ethics of human cloning? Where do you stand?