The Gospel for Zombies

Zombies are everywhere these days, and I don't just mean the Monday-morning-on-the-way-to-work zombies we encounter (or are) at Starbucks.

Zombie movies like Warm Bodies and World War Z fill the big screen, and The Walking Dead maintains its popularity on television. Zombies are showing up in books, too. "Pride and Prejudice and Zombies" is now a three-book series. The Center for Disease Control even used the premise of a zombie apocalypse to promote disaster preparedness in 2011. 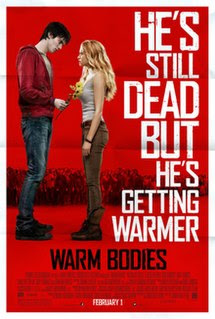 I'm not a big fan of zombie flicks or zombie lore, but I did go see Warm Bodies at the theater and it made me think about how the current zombie craze exposes some of our culture's deepest fears and longings.

First, we fear death. We especially fear a "living" death, in which we carry out lives that are completely devoid of love, hope, peace, or joy; lives motivated only by the need to find the next meal. We want more than mere consumerism and the daily grind... we want MEANING.

Second, we crave real relationships with other people... dead or alive. Without family, without friends, without personal connections, life loses its value.

Yep, true love can regenerate the deadest of the dead.
And isn't that the Gospel message in a nutshell?

Once you were dead because of your disobedience and your many sins.

You were once a zombie.

You used to live in sin, just like the rest of the world, obeying the devil—the commander of the powers in the unseen world. He is the spirit at work in the hearts of those who refuse to obey God. All of us used to live that way, following the passionate desires and inclinations of our sinful nature. By our very nature we were subject to God's anger, just like everyone else.

You did all the same yucky zombie stuff the rest of the zombies are doing.

But God is so rich in mercy, and he loved us so much, that even though we were dead because of our sins, he gave us life when he raised Christ from the dead. (It is only by God's grace that you have been saved!)

God reanimated you when He raised Christ from the dead, so you aren't a flesh-eating zombie anymore. Now learn to live like you're alive, because you are!

It's just a thought. Just one way to take something from our popular culture and turn the light of the Gospel of Christ on it. And it's something good to remember on those days you find yourself shuffling sadly through life without hope, joy, purpose, or meaning. You are NOT a zombie!

Niki Turner is a writer, former pastor's wife, mother of four, and grandmother of two. She has thus far been unsuccessful at coming up with catchy taglines for her writing, her purpose in life, or what she hopes to achieve in the future. Suggestions are welcome.