A REBEL HEART by Beth White, Review by Rebecca Maney

"The mission. Orders. Blow up the bridge, keep the Yanks from crossing. They mustn't cross into Mississippi." 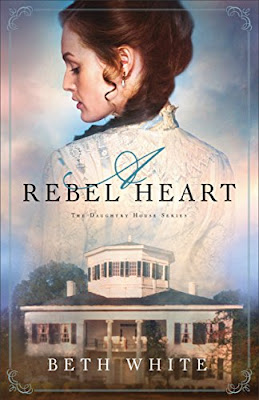 Unfortunately for some, the "Yanks" did cross into Mississippi and when a renegade band goes on a murdering rampage, Selah Daughtry's life is indelibly scarred. Finding herself on a train to meet with an Oxford banker, desperate to save her beloved plantation home from bankruptcy, Selah becomes a victim once more; a bizarre train wreck endangering her life, after which a handsome Yankee gentleman comes to her rescue. "Look at my eyes, Selah. I promise I won't let you fall."

Pinkerton agent and former Yankee military officer Levi Riggins mounts a rescue operation when the train upon which he is a passenger suddenly plunges over the side of a bridge. The lovely young woman seated across the aisle manages to help others before she helps herself, eventually trusting Levi to lower her to safety. Providentially, Levi's ongoing investigative assignment allows their paths to cross again, granting Levi the opportunity to broker an ingenious business arrangement that offers Selah's family the kind of restoration that they so desperately need. But the pieces aren't fitting together, and Levi begins to suspect that residents, both past and present, of Ithaca Plantation have been involved in criminal activity. His heart can only hope that it isn't Selah.

"Could she ever do enough good to right the wrong? . . . . . The only answer . . . .was a verse that went something like, 'He hath shown thee what is good; and what doth the Lord require of thee, but to do justly, and to love mercy, and to walk humbly with thy God.'"

"A Rebel Heart" is an outstanding story; its roots entangled within the past, present, and future of a generation that fought bravely and forgave courageously.


BACK COVER BLURB:
Five years after the final shot was fired in the War Between the States, Selah Daughtry can barely manage to keep herself, her two younger sisters, and their spinster cousin fed and clothed. With their family's Mississippi plantation swamped by debt and the Big House falling down around them, the only option seems to be giving up their ancestral land.

Pinkerton agent and former Union cavalryman Levi Riggins is investigating a series of robberies and sabotage linked to the impoverished Daughtry plantation. Posing as a hotel management agent for the railroad, he tells Selah he'll help her save her home, but only if it is converted into a hotel. With Selah otherwise engaged with renovations, Levi moves onto the property to "supervise" while he actually attends to his real assignment right under her nose.

Selah isn't sure she entirely trusts the handsome Yankee, but she'd do almost anything to save her home. What she never expected to encounter was his assault on her heart.