MORE THAN MEETS THE EYE by Karen Witemeyer, Reviewed by Rebecca Maney

"Was he friend or foe? Only one way to find out. Spying." 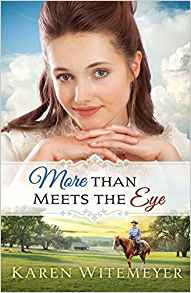 And just like that, Evangeline Hamilton stumbles upon a strange man and his horse hanging out on the edge of her family's property. . . . . . . . or actually, he found her after a slight misunderstanding about a wild pig attack. There was something pleasantly curious about the handsome cowboy with the jagged scar and the "questioning brow", he didn't seem to think her mismatched eyes were an omen.

"Good gray. She fought dirtier than a saloon brawler." Logan Fowler was unprepared when his damsel in distress turned out to be a warrior sprite. After untangling himself from the girl and her pig, he discovers that she is kin to the very man that he has come to find. Logan remains convinced that Zach Hamilton is responsible for his father's death and his mother's deep melancholy, so befriending the man's pretty sister just might give him the upper hand. But there was "more than meets the eye" when it came to Evangeline.

Enjoy this author's trademark wit as she navigates the swirling currents of revenge and romance. "Be ye kind to one another, tenderhearted, forgiving one another, even as God for Christ's sake hath forgiven you." Ephesians 4:32

*I purchased this book and was under no obligation to review, nor provide a positive review only.