A VAST AND GRACIOUS TIDE by Lisa Carter reviewed by Kim

This is my first read by Lisa Carter. I really like her writing style. It flows smoothly and you want to just keep reading. She also writes secondary characters that you actually care about! 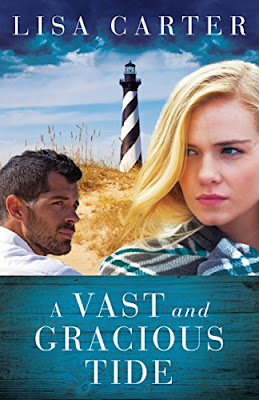 Caden is struggling. He has lost his friends and part of his leg to war. Then, his girlfriend dumps him. He’s not sure if he wants to live or not. Enter McKenna. In my opinion, she is a bit pushy and can be too outspoken. Normally, not the kind of personality I like to read. But, in this story, it works, because that is the only way to get through to Caden and help him heal both physically and mentally.

I liked Caden immediately. He was struggling at first, but once he got focused, he was a strong character and a great help to McKenna and her family. Due to his past, he was also struggling with God. I  loved how the quilt tied into God’s plan for both McKenna and Caden.

What drug this story down a bit for me was sometimes McKenna acted based solely on her emotions, which led to some bad decisions. She also frustrated me with her reaction, or lack there of, when it came to Bryce.

*I was given a complimentary copy of this book. All thoughts are my own. I was under no obligation to provide a positive review.

BACK COVER BLURB:
A murder on the tranquil beaches of the Outer Banks puts two strangers on a path to uncover the truth

Caden Wallis has suffered several devastating blows that have left him reeling. He’s lost friends and now his girlfriend to the ravages of war. He arrives on the Outer Banks for one final mission—to thank the woman who sent him a quilt while he was recuperating from his wounds at Walter Reed Army Hospital.

McKenna Dockery knows all about loss. She lost her mother at a young age, and her father has never been the same since he came home from his own war. She juggles the family business, her ailing father, and an aging grandmother. Much to Caden’s surprise, she is the quilter—not some elderly lady. The quilt was something she’d begun for her future husband but shipped to the military hospital after the tragic death of her fiancé.

When a man is found snared in a net and murdered on McKenna’s property, she and Caden must work together to bring the killer to justice. Each must learn to trust the other, or no one will be safe in the tangled web of conspiracy, greed, and deceit lurking in the tidal marshlands of the Outer Banks. A nor’easter, a sea turtle named Cecil, and a surf-crazy hound named Ginger conspire to bring these two searching hearts together through the vast and gracious tide of God’s love.