A wonderful glimpse into history during 1915. 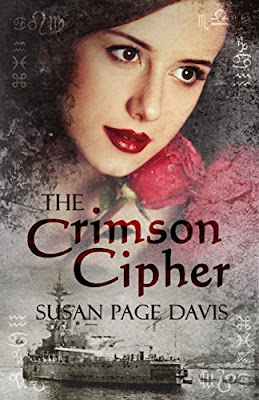 What is the Crimson Cipher? Will cracking this code lead to uncovering a sinister plot?
Susan takes real historical happenings and weaves a credible story around them. I was fascinated by the ciphers and the code breaking in the days before the United States got involved in WWI.

Emma Shuster has met Lieutenant John Patterson on the way to see her father at his college campus office in Maine. John has a scientific question for Professor Shuster. But when they arrive to greet him, they find him on the floor! Emma and her father have been working on a cipher machine for a bank. Now, the Navy is interested in her father’s work. John and Emma aid the government in their campaign against a looming enemy. Will her code breaking skills help the United States combat saboteurs? Is someone out to do Emma harm?

Lots of mystery and intrigue and a sweet romance. For fans of history and suspense. I am partial to them together.

BACK COVER BLURB:
It’s 1915, and Emma Shuster has far too much on her mind to entertain notions of romance.

Saboteurs are doing their best to keep the United States out of the Great War. Bridges and factories are being bombed, and ships are being sunk. When Emma’s code-breaker father is found murdered and his secret encryption project left unfinished, the navy offers Emma a civilian position cracking intercepted ciphers sent by foreign powers.

With enemies lurking at every turn, can she trust even those closest to her? Is romance the true motive behind her two suitors’ advances, or could one—or both of them—have traitorous intentions?
Emma races to discover the nefarious plans of her country’s foes and unmask their leader before more people are killed. And yet, her greatest challenge may be deciphering the cryptic messages sent by her heart.

*I received this book from the author. I was not required to post a favorable review. All opinions are my own.

BUY The Crimson Cipher at Amazon