A DARING VENTURE by Elizabeth Camden, review by Trixi Oberembt

Rosalind Werner and Nickolas Drake have the same goal in mind, providing clean water for Jersey City in 1908 to stave off thousands from dying from cholera. But they heavily clash when it comes to the method for accomplishing that goal! Nick crusades for extra filtration in the waterways while Rosalind, who is also a biochemist, crusades for chlorination to kill the bacteria causing the deaths. 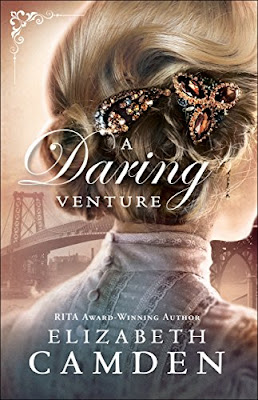 I admire Rosalind for going against convention to become probably the only female biochemists in a time period when it was frowned upon for women to be anything but keepers of the home. Her motivation drove her after watching both her mother and father die from the dreaded disease and nearly killing her younger brother. Having also fled from scandal at the university she attended in Germany, she's overcome a lot in her young life. Starting over in a new country, fighting against a powerful man in Nick all while proving herself capable in a man's world. It seems she'll let nothing deter her! Nick has risen from being a plumber learning at his grandfather's feet, to New York City Water Commissioner. Water has always been in his blood and working to make sure it is clean & safe for the residents is the same goal as Rosalind. He's willing to do what it takes to make sure that goal is met, even if it means butting heads with the beautiful biochemist!
What I loved the most about this story, is learning the history! I never knew that the simple act of adding the right amount of chloride to water eradicates harmful bacteria that caused one of America's deadliest diseases, cholera. I learned so much more about the methods of providing clean water then I ever knew. I appreciate Camden's massive amounts of research to make sure the story is true to form all while entertaining this reader and keeping me turning pages. I almost felt like I was in the middle of what was happening all around me! Watching history unfold in front of my eyes was thrilling and fascinating. If you love history, romance, a bit of scandal, family dynamics and action to keep the story moving, then I recommend this to you! This is only my second book I've read by Camden, and I'm certainly adding her to my must-read authors.
*I received a complimentary copy of the book from Bethany House and was under no obligation to leave a review. All opinions are my own. *

BACK COVER BLURB:
As a biochemist in early 1900s New York, Doctor Rosalind Werner has dedicated her life to the crusade against waterborne diseases. She is at the forefront of a groundbreaking technology that will change the way water is delivered to every household in the city--but only if she can get people to believe in her work.

Newly appointed Commissioner of Water for New York, Nicholas Drake is highly skeptical of Rosalind and her team's techniques. When a brewing court case throws him into direct confrontation with her, he is surprised by his reaction to the lovely scientist.

While Rosalind and Nick wage a private war against their own attraction, they stand firmly on opposite sides of a battle that will impact far more than just their own lives. As the controversy grows more public and inflammatory and Rosalind becomes the target of an unknown enemy, the odds stacked against these two rivals swiftly grow more insurmountable with every passing day.