If you enjoy nonstop action, intrigue, and suspense with some romance thrown in for extra measure, you’ll like Cold Fury by Susan Sleeman. Creating realistic, flawed, but engaging characters is one of Sleeman’s strengths along with her obvious research skills. This story drew me quickly and held my attention until the end. 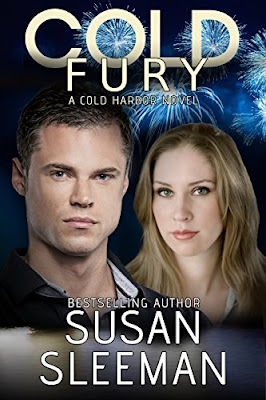 Jackson and Maggie had baggage from a shared history but were still drawn to each other when a crisis occurred and Maggie needed Jackson’s protection. I liked the thread of forgiveness that ran through the story and the hope and trust that was developed between them. This can be a stand-alone book, although it is part of a series. It’s fun to see appearances of characters from some of the other books in this story.

For clean Christian suspense that will keep you reading late into the night, Susan Sleeman is a go-to author. I’m looking forward to the next book in this series.

*I voluntarily reviewed a complimentary copy. All opinions are my own.

BACK COVER BLURB:
Six years ago tragedy tore them apart…
Maggie Turner happily works as an assistant professor in the Criminal Justice Department and lives a quiet life near campus. That is until Jackson Lockhart bursts into her life unexpectedly. Then a cyclone of emotions erupt as she remembers the tragedy that once tore them apart. She'd often thought of him, but they'd agreed never to see each other again, and so far, they'd kept their promise. But today…Jackson has a good reason for breaking his promise. Maggie's life depends on it.
Will it now bring them back together?
In an ongoing investigation, Jackson has learned that university officials secretly photographed her classroom in a study on attendance. The recorder was supposed to run only during the class session, but it malfunctioned and recorded an entire week, which includes a shocking murder that has now put Maggie's life in danger. Can Jackson unravel the lies surrounding this incident before the killer unleashes his fury on Maggie and takes her life?
BUY Cold Fury at Amazon