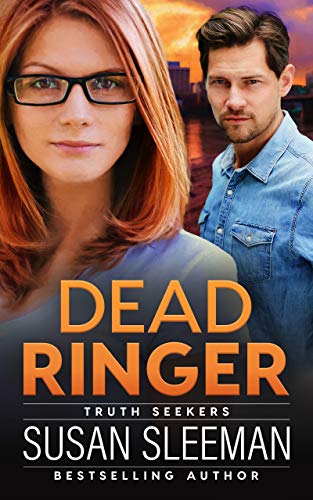 I can always count on Susan Sleeman for riveting, nail-biting romantic suspense. Her impeccable research and plot development, along with realistic, well-developed, and endearing characters never fail to satisfy. I was immediately intrigued by the premise of Dead Ringer with twin sisters who were unaware of each other’s presence. The story is well-crafted and unfolded layer by layer while leaving me guessing the entire time. The main characters, Emory Steele and Blake Jenkins, each had some emotional baggage to work through, and I enjoyed seeing their relationship grow and develop as they worked toward finding Emory’s twin sister Caitlyn.

This is the first book in a new series, The Truth Seekers, which promises to be another hit series by Sleeman. I’m looking forward to the stories behind some of the other characters in this book. If you enjoy heart-pounding suspense with some romance and inspiration thrown in for good measure, give this book and series a try!
*I voluntarily reviewed a complimentary copy. All opinions are my own.

BackCover Blurb:
She was hiding from her past…
When a local woman goes missing and Sheriff Blake Jenkins delivers her blood sample to DNA expert Emory Steele for analysis, Blake discovers Emory is a dead ringer for the missing woman. Blake’s gut says the woman is related to Emory. But Emory rejects the notion, requiring a DNA test before she’ll concede that she does indeed have a twin sister she never knew about.

Now she’ll do anything to see it come to light.
Emory joins Blake in a search for her missing sister, but when an attempt is made to abduct Emory as well, they begin to think the abduction is related to Emory’s birth parents. Blake vows to keep her under his watch until they discover what this maniac is looking for and bring him to justice. But Emory balks at him wanting to keep her under constant surveillance as she’s struggling to come to grips with a former brutal attack, and she wants nothing to do with a man who might want to get close to her. When it becomes clear that Blake is the only one who can keep her safe, will she let him get close enough to do so?