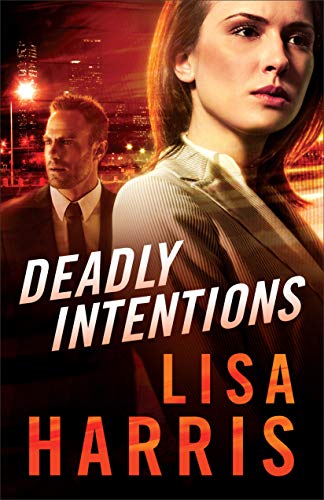 “There is no such thing as random.”

I would add there is no such thing as coincidence!

Caitlyn Lindsay might have suspicions about the death of three colleagues at MedTECH labs. But what was really the cause of their deaths and why? When she fears for her life, she turns to Detective Josh Solomon, the husband of one of the victims. Can they figure out what is going on before they, too, are silenced?

This was a very suspenseful novel with lots of twists and turns. It kept me guessing until the end. Ms. Harris really knows how to put her characters in jeopardy. An exciting and fast read because I wanted to discover what happened next. Her experience as a victim of a home invasion lends credibility to her writing.

The faith thread, though minimal, gave a very good quote of Caitlyn’s thoughts near the end. “She’d struggled understanding the love of her heavenly Father and had finally come to realize that it wasn’t based on what she did but on what he’d already done for her. The one true sacrificial love.” I wish we could have seen the characters voice their faith a bit more.

This was not my favorite book by Ms. Harris, I questioned the actions of the characters a time or two. Still it had a provocative premise and was a riveting story. I look forward to reading more from this author.

*I received a complimentary copy of this book from the publisher Revell, on behalf of the author. I was not required to give a favorable review. All opinions are my own.*

BackCover Blurb:
Research scientist Caitlyn Lindsey is convinced that someone is taking out her team one by one. First, a friend and research partner was killed in a home invasion. Three months ago, her boss died in a suspicious car accident. Four days ago, another partner supposedly committed suicide. And now Caitlyn herself has miraculously survived a hit-and-run. Afraid for her life with nowhere to turn, she reaches out to one of the victim's husbands, Detective Josh Solomon.

Though initially skeptical about Caitlyn's theory, Josh soon realizes that the attack that took his wife's life was anything but random. Now the two of them must discover the truth about who is after Caitlyn's team--and what their end game is--before it's too late.

In this nail-biting thriller, award-winning author Lisa Harris will have you believing that there's no such thing as random.