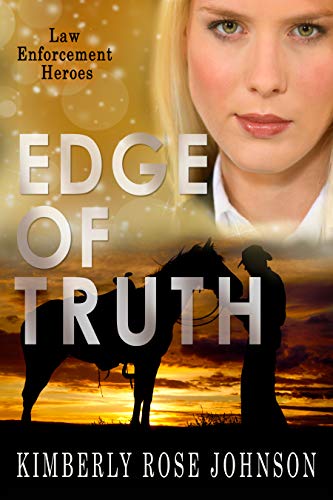 Inspirational romantic suspense is my second favorite genre to read in fiction and I love an author who can write well in it. I was pleasantly surprised to learn this was Kimberly Johnson's debut book in the category! I think her writing really shone in “Edge of Truth” , it had everything I love about romantic suspense in it.

I loved the balanced pacing of the romance and suspense. My heart rate really picked up towards the end when all the pieces started to come together and danger mounted! I had my suspicions on who was behind the attacks on Kara (other than the drug lord's hit man), but the author did a nice job of keeping me guessing. I think one of my favorite things about Jeff is how he helped gently guide Kara back to the faith she lost when things went bad in her life. He not only shared his faith, but lived it in everything. There were lies Kara had told herself about how God handled things and I like how Jeff was able to get through her defenses with words of truth. I think that made him a real hero in my mind! Seeing them work together and eventually fall in love was fun to watch. The hard won happily-ever-after is the ultimate reward for me as a reader.

I was hooked from the first page until the ending! I'm glad I took the chance to read this because there wasn't anything I didn't like about it. If you like getting caught up in a well-written and well-paced suspense story full of likable characters, then “Edge of Truth” is for you!

* I received a complimentary copy from the author and was under no obligation to leave a favorable review. All opinions are my own. *

BackCover Blurb:
The DEA sends two of its best agents, Kara Nelson and Jeff Clark, to Central Oregon, to shut down a major drug ring. Kara and Jeff usually work alone, but Operation Trail Ride throws them undercover together in a way neither of them expected.

A notorious Miami drug lord wants Kara dead. Can these agents pull off the greatest acting job of their lives—and manage the sparks flying between them?

Or will they die trying?