THE SEAMSTRESS by Allison Pittman, Reviewed by Rebecca Maney 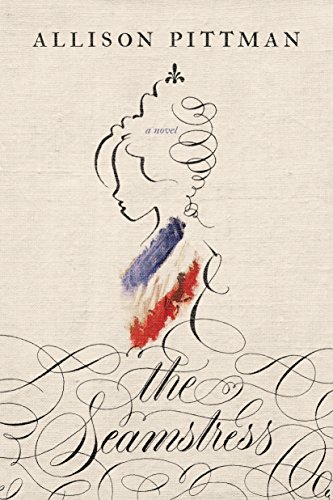 France is on the brink of a revolution, while two orphaned cousins are rescued by a man of faith and unprecedented generosity. As Renee and Laurette grow into lovely young women, their paths seem destined to either flourish in the idyllic village of Mouton Blanc, where sheep produce fine wool and the air is crisp and clean; or to diverge into a place where dreams are made, only to be forever lost in the middle of a nation's nightmare.

Renee's natural talents as a seamtress provide her with a life-changing opportunity, while Laurette's lust for significance lead her down the path of a prodigal. One man loves them both, the one who has provided them with food and shelter for much of their young lives; a mentor guardian of sorts, with wisdom far beyond his years; Emile Gangon. As the years go by, Gangon's steady influence and unconditional love provide a haven of memories for one woman and a home to return to for another . . . "grant me dreams to sleep in peace".

The beautiful word flow in this story is nearly impossible to describe; it carries a story that is deep, but not heavy, sweeping alongside characters who might think that they are forgettable, but they're not.
*I bought this book and was under no obligation to review it, nor provide a positive review.

Back Cover Blurb:
A beautifully crafted story breathes life into the cameo character from the classic novel A Tale of Two Cities.

On a tranquil farm nestled in the French countryside, two orphaned cousins—Renée and Laurette—have been raised under the caring guardianship of young Émile Gagnon, the last of a once-prosperous family. No longer starving girls, Laurette and Renée now spend days tending Gagnon's sheep, and nights in their cozy loft, whispering secrets and dreams in this time of waning innocence and peace.

Paris groans with a restlessness that can no longer be contained within its city streets. Hunger and hatred fuel her people. Violence seeps into the ornate halls of Versailles. Even Gagnon’s table in the quiet village of Mouton Blanc bears witness to the rumbles of rebellion, where Marcel Moreau embodies its voice and heart.

It is the story that has never been told.

In one night, the best and worst of fate collide. A chance encounter with a fashionable woman will bring Renée’s sewing skills to light and secure a place in the court of Queen Marie Antoinette. An act of reckless passion will throw Laurette into the arms of the increasingly militant Marcel. And Gagnon, steadfast in his faith in God and country, can only watch as those he loves march straight into the heart of the revolution.
Available in digital ebook, paperback, hardcover and audiobook:
Buy The Seamstress at Amazon
Buy The Seamstress at Christianbook.com