WHOSE WAVES THESE ARE by Amanda Dykes, Reviewed by Kim 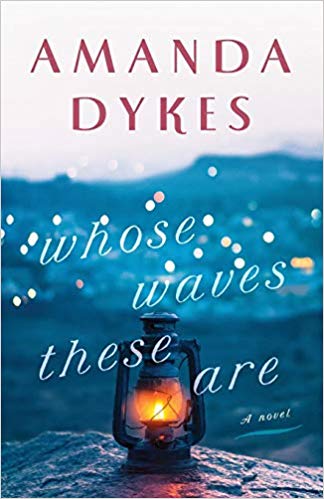 I have absolutely no idea how to write this review and I know I won’t do this story justice. I am actually at a loss for words! I cannot believe that this is Amanda Dykes’ debut novel. This story is so beautiful! It is lyrical, layered, deep, and so so good! This story moved me so deeply.

I loved so many characters in this book, but I am going to focus on my two favorites. Robert’s story might equally break your heart and make it happy. Yes, he goes through some tragedies in his life, but the way he deals with them, with never ending hope, will totally tug on your heartstrings and make you love him.

Jeremiah! Wow! Another deeply layered character who I fell in love with as soon as he wrote on his t-shirt! And, the scene towards the end with the letter- wow! One of the best most heart wrenchingly beautiful scenes I’ve ever read.

I highly recommend this story and can’t wait to read whatever Amanda writes next!
*I bought this book and was under no obligation to write a positive review.

Also, see Winnie and Paula's Review of this novel!

Back Cover Blurb:
In the wake of WWII, a grieving fisherman submits a poem to a local newspaper: a rallying cry for hope, purpose . . . and rocks. Send me a rock for the person you lost, and I will build something life-giving. When the poem spreads farther than he ever intended, Robert Bliss's humble words change the tide of a nation. Boxes of rocks inundate the tiny, coastal Maine town, and he sets his calloused hands to work, but the building halts when tragedy strikes.

Decades later, Annie Bliss is summoned back to Ansel-by-the-Sea when she learns her Great-Uncle Robert, the man who became her refuge during the hardest summer of her youth, is now the one in need of help. What she didn't anticipate was finding a wall of heavy boxes hiding in his home. Long-ago memories of stone ruins on a nearby island trigger her curiosity, igniting a fire in her anthropologist soul to uncover answers.

She joins forces with the handsome and mysterious harbor postman, and all her hopes of mending the decades-old chasm in her family seem to point back to the ruins. But with Robert failing fast, her search for answers battles against time, a foe as relentless as the ever-crashing waves upon the sea.