THE EDGE OF BELONGING by Amanda Cox, Reviewed by Rebecca Maney 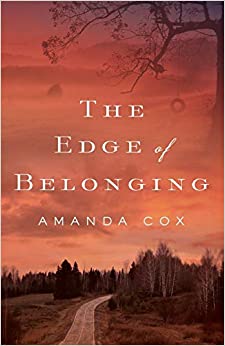 "There really are people who are alone in the world. People who have no one to look after them. . . . If the story of my life could say one thing, I'd hope it would show the importance of venturing into the highways and the hedges to let invisible people know they're seen and loved."

Harvey James was one of "those"people. Alone in the world, surviving on his own by remaining invisible. . . . until one day the cries of one who was even more vulnerable than he, sounded from the edge of belonging; and life was never the same.

Ivy Rose returns home with a heart full of sadness and a mind that hasn't fully recovered from the weight of her misjudgments; the fact of the matter is, she feels lost or maybe she was never found . . . except that she was . . . found . . . all those years ago on her parents doorstep. Cleaning out Grandma Pearl's possessions will be bittersweet, but she won't be alone, not really. And she has so many questions . . . and judging from her grandma's final correspondence, Pearl had the answers.

"There are things I never told you. Sometimes I kept silent because I lacked wisdom to know how to speak difficult truths. . .  I knew I couldn't leave this world without giving you answers to the questions that have plagued your mind since you were a little girl." But the journal that her grandma unveils . . . is nowhere to be found.

Without a doubt, readers have just been introduced to an author with an incredible acuity for deep, authentic stories; delivered with a measure of tenderness and grace.
*I received a copy of this book from the publisher. The opinions stated above are entirely my own. 4.5 stars

see Nicole Cook's and Paula Shreckhise's reviews!
BackCover Blurb:
When Ivy Rose returns to her hometown to oversee her late grandmother's estate sale, she soon discovers that the woman left behind more than trinkets and photo frames--she provided a path to the truth behind Ivy's adoption. Shocked, Ivy seeks clues to her past, but a key piece to the mystery is missing.

Twenty-four years earlier, Harvey James finds an abandoned newborn who gives him a sense of human connection for the first time in his life. His desire to care for the baby runs up against the stark fact that he is homeless. When he becomes entwined with two people seeking to help him find his way, Harvey knows he must keep the baby a secret or risk losing the only person he's ever loved.

In this dual-timeline story from debut novelist Amanda Cox, the truth--both the search for it and the desire to keep it from others--takes center stage as Ivy and Harvey grapple with love, loss, and letting go.