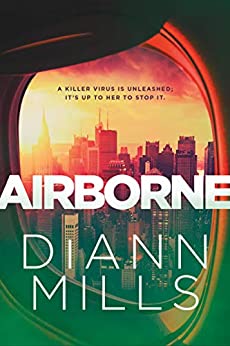 "You're in my way, a liability. I can't move ahead in my life saddled with a wife. Trust me on this one, Heather. I'll do anything to make it happen."

Devastated after being forced to separate from her husband, Houston FBI Agent Heather Lawrence books a trip to Salzburg, Germany hoping to salve her wounded heart with time away and beautiful music. Instead, the unthinkable occurs. Someone on her flight releases a deadly airborne contagion with horrific symptoms, and for multiple innocent victims, death arrives quickly. So rather than relaxing, Heather launches into full-blown agent mode; helping those that she can while ruminating on the fact that her husband's expertise lies in the field of infectious diseases. A small spark of unease ignites into a flame of doubt, surely Chad wouldn't risk dozens of lives to advance his career, or would he? Others agree; Dr. Chad Lawrence becomes the F. B. I.'s prime suspect.

Meanwhile, Heather escapes infection and is transported to a remote location for a lengthy quarantine stay, along with the other seemingly healthy passengers. It's then Chad receives this troubling text - "The hospital said Heather's in ICU."

There are so many great takeaways from this story; first of all, the story line is uniquely plotted; secondly, the author allows plenty of room for her characters to live and breathe and change perspectives; thirdly, the perpetrator is devious and clever . . . it could be anyone, it could be everyone, he or she deftly dodges recognition in spite of the F. B. I. 's fast and furious attempts to bring the truth to light. But more importantly, what I think readers will remember most about this story is the spiritual journey that the two main characters share; their authenticity (while excruciating and difficult) is refreshing. By the end of the story, readers will have replaced their contempt with admiration, admitting that the ability of the Holy Spirit to change a life from within is a beautiful thing to behold.

"Echoes of mercy, whispers of love . . . . ."
*I purchased this book and was under no obligation to provide a positive review.
BackCover Blurb:
Heather Lawrence’s long-awaited vacation to Salzburg wasn’t supposed to go like this. Mere hours into the transatlantic flight, the Houston FBI agent is awakened when passengers begin exhibiting horrific symptoms of an unknown infection. As the virus quickly spreads and dozens of passengers fall ill, Heather fears she’s witnessing an epidemic similar to ones her estranged husband studies for a living—but this airborne contagion may have been deliberately released.

While Heather remains quarantined with other survivors, she works with her FBI colleagues to identify the person behind this attack. The prime suspect? Dr. Chad Lawrence, an expert in his field . . . and Heather’s husband. The Lawrences’ marriage has been on the rocks since Chad announced his career took precedence over his wife and future family and moved out.

As more victims fall prey days after the initial outbreak, time’s running out to hunt down the killer, one who may be closer to the victims than anyone ever expected.
Tyndale House, April 2020
Available in digital ebook, paperback, hardcover and audiobook:
Buy Airborne at Amazon
Buy Airborne at Christianbook.com
Posted by Debra E. Marvin at October 02, 2020