UNDER THE TULIP TREE by Michelle Shocklee, Reviewed by Rebecca Maney 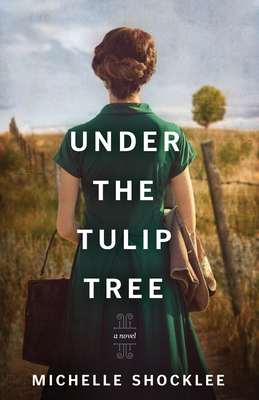 "Hatred is a powerful thing. It can turn a person into something they ain't. It don't matter what color your skin in."

Never did she imagine that taking a job with the Federal Writers' Project would lead her to a face in the mirror that she never wanted to call her own. Lorena Leland simply dreamed of being a writer, that's all. Her post-depression family desperately needed the income that she could generate and the job sounded interesting if not a bit inconsequential, for "How could interviewing people who'd lived in bondage decades earlier help (Lorena) see her future more clearly? There was only one way to find out."

Mrs. Francis Washington. "Fact is, I ain't never told my story to anyone since freedom come. No sense in rememberin' them days, I say". But remember them she did; Lorena spent days listening and writing, and writing and listening, to a story that begged release. . . . under the tulip tree.

Behold the lives of two women; one young and unsure of herself, the other "older than dirt" and quite certain that she has lived the life that God meant her to live; nonetheless the struggles were real, for Frankie's outer wounds scarcely covered the ones she kept hidden within. Skillfully showcasing the power of forgiveness, the author tastefully pens events from a period of history that many would like to pretend never happened, but it's only in the remembering that we can erase the possibility of repetition.

*I purchased this book and was under no obligation to provide a positive review.  4.5 stars
BackCover Blurb:
Sixteen-year-old Lorena Leland’s dreams of a rich and fulfilling life as a writer are dashed when the stock market crashes in 1929. Seven years into the Great Depression, Rena’s banker father has retreated into the bottle, her sister is married to a lazy charlatan and gambler, and Rena is an unemployed newspaper reporter. Eager for any writing job, Rena accepts a position interviewing former slaves for the Federal Writers’ Project. There, she meets Frankie Washington, a 101-year-old woman whose honest yet tragic past captivates Rena.

As Frankie recounts her life as a slave, Rena is horrified to learn of all the older woman has endured—especially because Rena’s ancestors owned slaves. While Frankie’s story challenges Rena’s preconceptions about slavery, it also connects the two women whose lives are otherwise separated by age, race, and circumstances. But will this bond of respect, admiration, and friendship be broken by a revelation neither woman sees coming?
Tyndale House Publishers, September 2020
Available in digital ebook, paperback and audiobook:
Buy Under the Tulip Tree at Amazon
Buy Under the Tulip Tree at Christianbook.com
Posted by Debra E. Marvin at October 12, 2020