THE LONDON RESTORATION by Rachel McMillan, Reviewed by Rebecca Maney 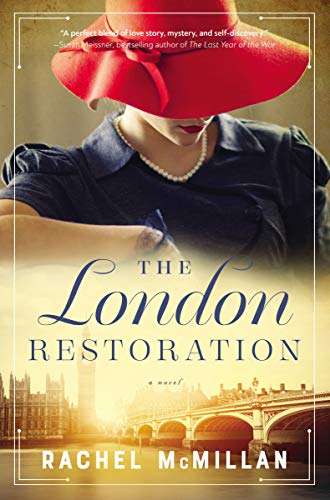 "While some adjusted to air-raid sirens and others to the lost light of blackouts, Diana Somerville never recovered from the absence of church bells."
London's grand churches, whose spires graced the city's classic skyline, were Diana Somerville's lifeblood; she cherished them, she inhaled their presence, they exhilarated her, they introduced her to the love of her life. "Diana Foyle. Like the bookshop on Charing Cross Road." . . . became Mrs. Brent Somerville within the ruins of one of those magnificent houses of worship, for the Second World War had only just begun to unleash its fury from the skies.

After being separated for four interminable years during the war, Diana and Brent finally manage to re-unite, finding that the words they cannot say shout above the ones that they barely manage to whisper. Secrets; they can bind or break, can they not? . . . . . exhibiting enough strength to topple a marriage just as surely as a cracked foundation dares to cripple the very building that depends on its stability. Diana's work within British intelligence is a story that she cannot tell, while Brent relives the nightmares of his battlefield experiences each and every night. Can they dare to love, not who they were, but who they have become? Especially, and maybe because, Diana's promise to another has not yet been fulfilled.
It's a restoration story for the ages, for just like Diana's beloved houses of worship, the cracks and repairs between these two lovers become part an integral part of their reconstructed unity, "for as long as a populous finds its heart in the the center of churches, so our nation will rise. Our churches are our heartbeat".
Readers should ready themselves to sink hard and fast into McMillan's lush descriptive prose, heartily admiring the author's vast knowledge of history, architecture, and classical music while letting her book's message tenderly imprint "pragma, philia, ludus, storge, agape" . . . . love, upon the pages of their hearts.
* I purchased this book. Light faith thread.

The secrets that mght save a nation could shatter a marriage.
Madly in love, Diana Foyle and Brent Somerville married in London as the bombs of World War II dropped on their beloved city. Without time for a honeymoon, the couple spent the next four years apart.
Diana, an architectural historian, took a top-secret intelligence post at Bletchley Park. Brent, a professor of theology at King’s College, believed his wife was working for the Foreign Office as a translator when he was injured in an attack on the European front.
Now that the war is over, the Somervilles’ long-anticipated reunion is strained by everything they cannot speak of. Diana’s extensive knowledge of London’s churches could help bring down a Russian agent named Eternity. She’s eager to help MI6 thwart Communist efforts to start a new war, but because of the Official Secrets Act, Diana can’t tell Brent the truth about her work.

Determined to save their marriage and rebuild the city they call home, Diana and Brent’s love is put to the ultimate test as they navigate the rubble of war and the ruins of broken trust.