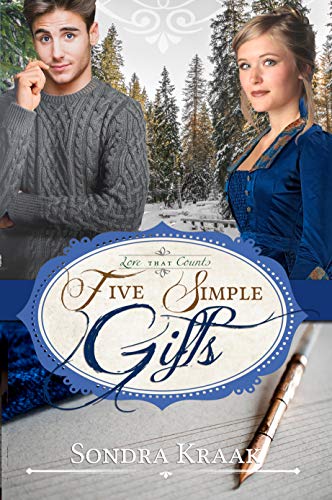 "Holiness was a strange thing. Just when he thought he'd aligned himself with the Lord, his thoughts betrayed him. If not his thoughts, then unkind words, impatience, fear. . . . . . Especially fear."
Most would never imagine that the adventurous, flirtatious, eternally optimistic lumber magnate Wilder Monaghan could struggle with anything remotely close to fear or anxiety; Wilder was rumored to live his life with minimal restraints, while Langley Taft wore self-discipline like a buttoned-up-to-her-chin-winter-coat. So why was Langley suddenly bent on following Wilder across the country with his son; her sister's son, the son whom Wilder thought had died alongside his mother? Because . . . it was the right thing to do??

Having to arrest Langley Taft upon her arrival in Pine Creek was the last thing on temporary deputy sheriff Wilder Monaghan's mind, for "the last person who should be behind bars was the compliant and dutiful Langley Taft". Stealing silver from her previous husband's home? Preposterous. In fact, why was she even in Pine Creek to begin with?

Being drawn together by awkward circumstances and confusing consequences is not the ideal way for opposites to attract, yet readers will absolutely relish the deep, meaningful conversations between the quick witted Wilder and the so-not-going-there Langley, who loves her lists and is always keeping score; when she can keep Wilder from changing the rules. But five simple gifts combined with five earnest requests of the Lord, take this story from an entertaining surface level to the immeasurable depths that this author's fans expect and admire.

"The Lord your God is with you; he is mighty to save. He will take great delight in you, he will quiet you with his love, he will rejoice over you with singing."
*I purchased this book, and had no obligation to provide a positive review. 3- Strong faith thread.

BackCover Blurb:
Langley Taft is a firm believer in the narrow way. She trained to work alongside her father in their lumber dynasty and married the man of her parents’ choosing. A man who turned around and issued her a humiliating divorce. Left alone to raise her sister’s illegitimate son, she defies her family to do what she knows is right: deliver the baby to his father—even if that man is Wilder Monaghan, the irresponsible heir to a rival lumber company who lives on the other side of the country. And who happens to be the scoundrel she once fancied in her youth.

A lover of adventure, opportunity, and all things exciting, Wilder isn’t prepared for the surprise appearance of the son he thought was dead, or for the woman who shows up with her life shaded by unjust accusations but determined to help him raise his son. Parenting alongside the stringent Langley might be his most challenging adventure yet. Or his most rewarding, provided he can teach her how to have fun and in the process win her affections. But why would a studious, responsible woman like Langley Taft look twice at him, a reprobate trying to find his course back to the narrow way?

As secrets are revealed, driving a wedge between Wilder and Langley, they both must humble themselves to receive a gift they did not earn, a gift not bought with money or charm: the gift of a second chance.
TrailHouse Publishers, September 2020
Available in digital ebook and paperback at Amazon
Posted by Debra E. Marvin at November 14, 2020